With the launch of the XBox 360, Wii and PlayStation 3, console gaming entered a golden era. At launch, the graphics were comparable with desktop PCs and the improved revenue streams associated with console games attracted plenty of titles to choose exclusive launches with one or other platform. Unfortunately, the specifications of the XBox One and PS4 were behind desktop PCs at launch and the way the price of 4K hardware collapsed in 2015 didn't help the consoles look good at all. Will products like the Steam Machine from Cyberpower's console brand Syber, create a major new market for PC hardware based console gaming?

Microsoft has always received a lot of grief over its pricing policy on the Windows operating system. Whether you're a fan or hater, it definitely adds £50-100 to the price of any new PC. In real world terms, that represents a real step up in either CPU or GPU.

SteamOS comes from a different place entirely. SteamOS is a partially open source Linux-based operating system developed for Linux-compatible Steam games – and it includes other entertainment-supporting features as well. With the world plus dog becoming ever more comfortable with a cloud way of working, users readily accept Google Docs and non-Outlook email clients. If you don't need Microsoft-specific apps – and you want over 1,500 games to choose from – would you rather invest the additional £80 into Microsoft Windows or more powerful hardware? 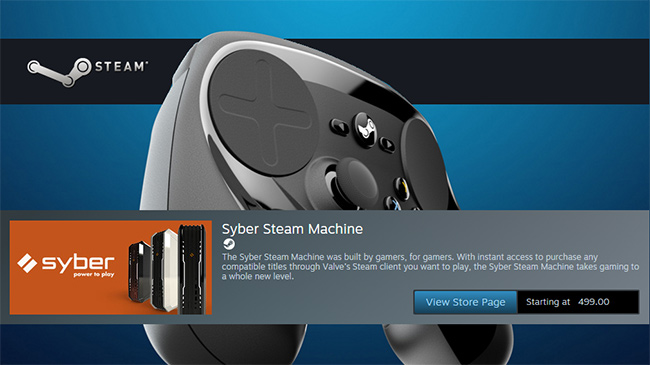 Overall, Cyberpower's Syber range of Steam Machines begins with a Core i3 spec at £499 and extends through to a Core i7 model, complete with GTX980 for £1,199. Here are the specifics from this page:-

“These units are completely upgradeable, using standard PC components”, said David Scott, Cyberpower's marketing guru. “Which means you won't be stuck on the same graphics card for up to 8 years – as you were with previous consoles”.

Here are the Cyberpower promo shots of the Syber Steam Machine, to give you an idea of the look from each angle.

The units are clearly bigger than some of their counterparts, we asked David why.

“If you're prepared to live without the most powerful components and don't want to think about upgrading, then you can make a Steam Machine with mobile parts”, he explained. “We don't think that's what gamers want, so we went with a fully upgradeable system”.

Valve must be happy with the choices that David's company has made, because Cyberpower is one of only two UK manufacturers to be appointed as official partners for the Steam Machine launch.

KitGuru says: Steam Machines don't have to succeed against the same metrics as the PS/4 or XBox One. For Valve it's simply another way to boost game sales and the ‘partner model' it has adopted means no huge investment in hardware stock. With a Steam Machine, you won't be playing Star Wars: Battlefront or Call of Duty: Black Ops 3 on day one, but if you're that into gaming then you'll probably have a console and high end gaming PC already – so the Syber would simply add living room convenience.