Last year, Acer began pushing its Predator gaming brand into the laptop space. It made quite the first impression too, with a massive 21:9 ultra-wide display and desktop-grade GPU horsepower under the hood. This year though, Acer is cooling off a bit by building something a little more traditional. The new Acer Predator Triton 700 trades in some power for portability, though it will still be a capable gaming system.

The Triton 700 is an ultra thin gaming laptop, measuring in at just 18mm thick. It comes with a 15.6-inch full HD IPS display, an NVMe SSD and varying GTX 10-series GPUs under the hood. I imagine there will be a GTX 1060, GTX 1070 and GTX 1080 model available eventually, all of which should be capable of running modern games at 1080p. 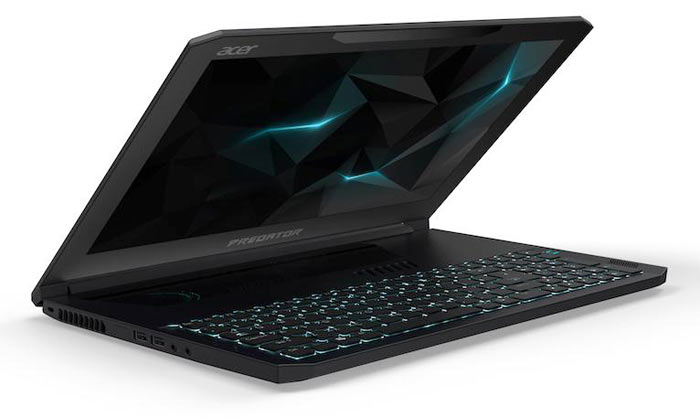 On the CPU side of things, these laptops pack an Intel Kaby Lake processor, again, the exact CPU will vary depending on which model you go for.

Either way, the one big challenge with thin/light gaming laptops is that there isn’t a whole lot of space for cooling. To get around this, Acer is using dual AeroBlade 3D fans, which it claims provide the most advanced thermal performance around.

In an effort to remain a ‘no compromise’ system, the Triton 700 also includes a low-profile mechanical keyboard, so even the typing experience should be well ahead of what many other laptops currently offer.

The Acer Predator Triton 700 will be available later this year, though pricing will vary depending on the hardware spec you opt for. We are hearing that there will be at least one model going for $3000.

KitGuru Says: As cool as it was to see a 21:9 ultra-wide laptop last year, it was a bit too bulky to be practical for most people. The Triton 700 on the other hand is a big improvement in that area by the looks of things. It will certainly be interesting to get some hands on time with it when review units start going out.