The Ultrastar He12 ships in a standard 3.5-inch chassis and is available with either a SATA 6Gbps or SAS 12Gbps interface. The drive itself is filled with helium, which is less dense than air, allowing for thinner discs under the hood and more stable levels of performance.

As with most HDDs, this is a 7200 RPM drive, though it does have a large 256MB cache. Exact pricing is still up in the air but these drives are starting to make their way to distribution channels, meaning retail availability should pop up fairly soon. You can read more about both the 12TB and 14TB drives in the original story below.

Original Story: Western Digital may have just started to break into the Solid State Drive market but the company certainly hasn't forgotten its roots in the Hard Drive space. This year, Western Digital will be coming out with two new helium-filled HDDs for data junkies, providing 12TB and 14TB of storage space.

Western Digital's 12TB HGST Ultrastar HE12 drive is going to begin shipping immediately. It is an eight-platter drive and spins at 7200 RPM so it is speedy enough for a mechanical drive. It will be available with both SAS and SATA connections to appease consumers and enterprise users. 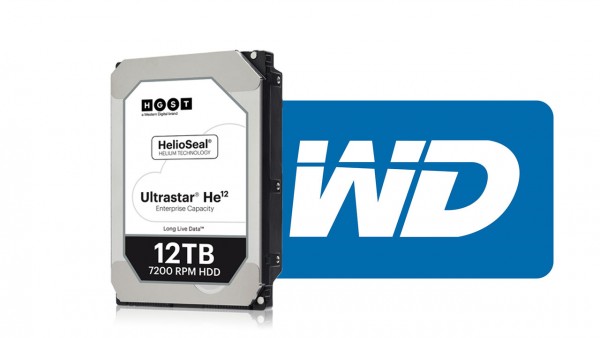 The 14TB HGST Ultrastar HE12 will be shipping a little later on this year and will also feature eight platters, speeds of 7200 RPM and SAS/SATA variants. Both the 12TB and 14TB drive feature 256MB of cache and an 8ms seek time for reads and an 8.6ms seek time for writes.

The one main difference between the 12TB and 14TB drive besides capacity is the data recording method. The 12TB uses perpendicular magnetic recording, meanwhile the 14TB uses shingled magnetic recording. The latter can pack up to 25 percent more data on the same platter compared to a PMR drive, so we may even see 16TB drives at some point in the next year or two.

KitGuru Says: I'm not much of a file hoarder so I don't think I could fill up even half of a 14TB or 12TB HDD. I imagine our NAS using readers would feel quite differently though. How much space do you use in total? Would you pick up a 12TB or a 14TB drive?