CES 2020: Alienware’s latest prototype is a PC gaming alternative to the Nintendo Switch

We are used to seeing modded systems and crazy product prototypes at CES but Alienware's Concept UFO still managed to catch us by surprise. It is essentially a PC version of a Nintendo Switch, complete with detachable handheld controllers.

The main unit is a tablet-sized PC with an 8-inch Full HD screen and an Intel CPU under the hood. Games run on integrated graphics, so performance across games will vary but feedback so far seems to indicate that Concept UFO is a really cool device. 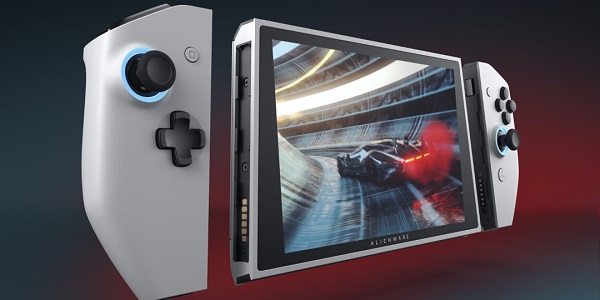 Like the Nintendo Switch, Concept UFO uses USB-C for charging and connecting externally to a TV screen. You can play in handheld mode, or dock it and detach the controllers to play. Since this is a PC, other controllers are also supported, in addition to mouse and keyboard.

One of the other advantages Concept UFO has is its larger size and button layout, making it more ergonomic for handheld play. Dell/Alienware has spent the last few months testing and making tweaks to these areas to strike the right balance. If this does end up turning into something you can actually buy, you should expect it to house a 10th Gen Intel Core series processor and include WiFi, Bluetooth and Thunderbolt.

KitGuru Says: Alienware has already experimented with a more ‘console like' gaming system with its own Steam Machine. Aiming for a handheld gaming PC design is much more ambitious but so far, it seems doable. It will be interesting to see where this project goes from here, after all, Razer also released a PC tablet with side controllers once upon a time, so it can be done.