Intel has announced its fourth-quarter and full-year financial results for 2019 and despite AMD's recent resurgence with Zen 2 architecture based processors, Intel’s annual revenue has increased to $72 billion, which is a record financial year for the company.

Intel has recorded a record fourth-quarter financial result for 2019 with total revenue at $20.8 billion which is an increase of eight percent year on year. Intel’s full-year revenue set an all-time record with the company making $72 billion, that is up two percent year on year data-centric growth.

In addition, Intel also announced its board of directors have approved a five percent cash dividend increase, taking it up to £1.32 per share on an annual basis. A quarterly dividend of $0.33 per share on the company’s common stock was also declared by the board and will be payable on 1st March. 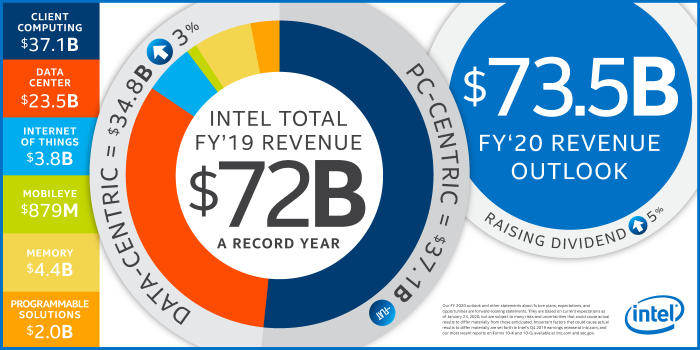 “In 2019, we gained share in an expanded addressable market that demands more performance to process, move and store data,” said Bob Swan, Intel CEO. “One year into our long-term financial plan, we have outperformed our revenue and EPS expectations. Looking ahead, we are investing to win the technology inflections of the future, play a bigger role in the success of our customers and increase shareholder returns.”

In the fourth quarter of 2109, Intel generated approximately $9.9 billion in cash from operations while recording the company's best-ever data-centric revenue which was up 15 percent year on year. Intel achieved record revenue over the full year while investing $13.4 billion in research and development. For the full year, Intel received a generated $33.1 billion from cash operations.

KitGuru says:  While the Ryzen effect may have hurt Intel’s domination in the CPU market over the last couple of years, it has not affected the company’s revenue since Intel is more than just a chipmaker.