Intel's next generation NUC is coming soon and recent leaks have given us a good look at its planned specifications. The Intel NUC 11 Extreme Compute Element is a small, graphics card-sized PC designed for very compact cases. Despite its size, it looks like Intel won't be cutting down on anything, offering up to a Core i9-11980HK CPU and 64GB of RAM.

Just like the previous NUC 9 Extreme, the slide leaked on Chiphell shows that the NUC 11 Extreme, codenamed “Driver Bay”, will have three CPU tiers to choose from. Options include Tiger Lake-H45 Core i9, Core i7, and Core i5 processors. These processors will be paired with up to 64GB of DDR4-3200 SODIMMs in a dual-channel configuration. 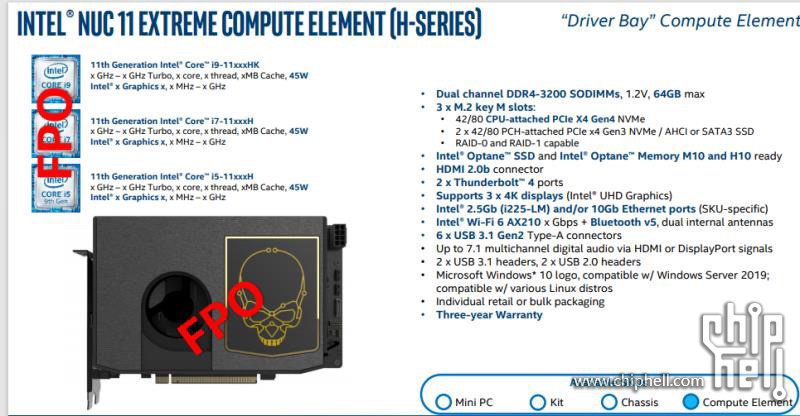 The slide further details the NUC 11 Extreme specifications, which include 3x M.2 slots for PCIe 4.0/3.0 storage and support for Intel Optane Memory M10, H10 and Optane SSDs. For display connectivity, there's an HDMI 2.0b connector and 2x Thunderbolt 4 ports, supporting up to 3x 4K displays with the Intel iGPU. The mini-PC will also feature 6x USB-A 3.1 connectors, Intel 2.5G and/or 10G network interfaces, Bluetooth 5, and Wi-Fi 6.

Comparing both the NUC 9 Extreme and the NUC 11 Extreme, both units seem to be similarly sized with some aesthetic differences. The single 8-pin power connector is at the same position as its predecessor, on the top right corner. The cooling solution has been modified with a slightly bigger fan and located closer to the centre. The cover has also been changed, replacing the old Intel logo with Intel's skull.

We recently spent some time modding the Intel NUC 9 Extreme, so if you are interested in mini-PCs, be sure to check out our series on that, HERE.

KitGuru says: The NUC 11 Extreme is shaping up to be very powerful, especially for its size. Have any of you used an Intel NUC before? What do you think of the upcoming NUC 11 Extreme?