For many, the choice of GPU is affected by much more than simply how powerful it is. Nvidia has been investing greatly into exclusive technologies for its GPUs such as DLSS, Nvidia Reflex and more. The company has now announced that Alan Wake Remastered will support these technologies, bringing the total number of DLSS-supported games up to 100.

Ahead of its release on the 5th of October, Nvidia has announced that those with Nvidia GPUs will benefit from enhanced performance on Alan Wake Remastered thanks to the implementation of DLSS. According to the GPU manufacturer, DLSS Performance mode will allow for every single RTX GPU to run the game at 4K/60FPS with max settings enabled: 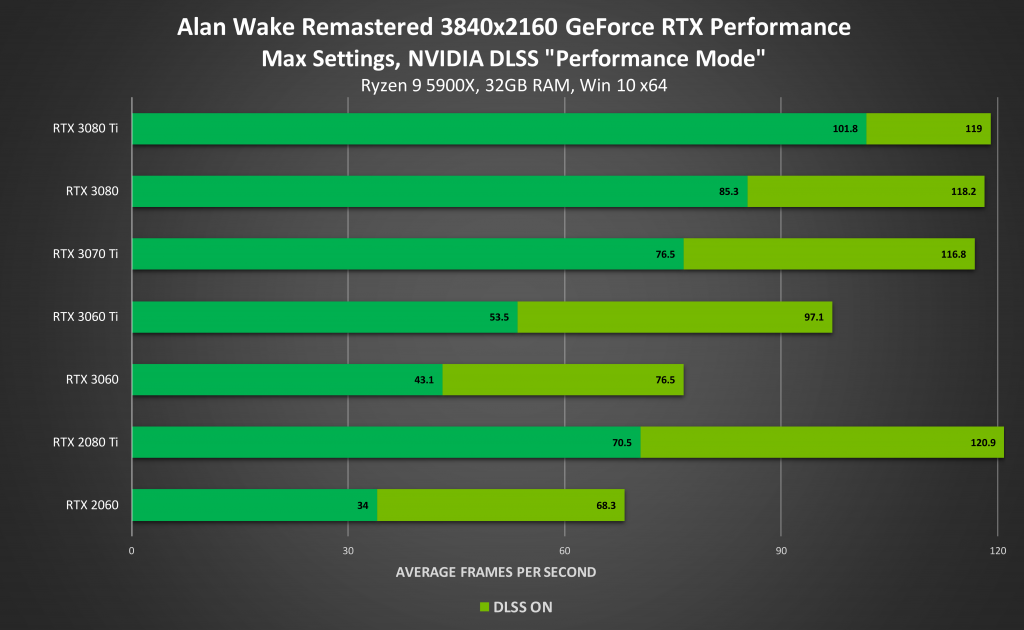 That is not all however, as thanks to a previously announced Unreal Engine 4 plugin which allows for much easier implementation of DLSS, 28 more games have been announced to be receiving the technology.

In total, Nvidia’s DLSS is now available on over 100 games, marking a major milestone for the technology. For many who use DLSS, the results speak for themselves, and as we move past the resolution wars it seems the future of gaming lies in deep learning and AI. The only thing seemingly holding back the technology now is exclusivity agreements, with some games opting to use AMD’s FidelityFX instead. Of course, developers can choose to implement both, and so hopefully as these technologies mature, developers will choose to put the user experience above exclusivity deals. The full list of newly supported games can be found HERE.

KitGuru says: What do you think of DLSS? What about FidelityFX Super Resolution? What game do you want to see get it next? Let us know down below/