If there’s one thing making the hardware market stagnate, it’s the gaming console. That’s according to you, the KitGuru reader. Without amazing new games coming through in droves, where’s the drive to buy new hardware? KitGuru’s loyal followers lay the blame at the collective doors of Microsoft, Sony and Nintendo. We have a look to see if the accused warrant the accusation.

Since KitGuru Labs first opened its doors, many many moons ago, we have also been running opinion polls. Regular readers will have noticed them on the right hand side of our home page. While Gallup, Mori and the rest of the world’s top monitoring companies are unlikely to stay awake at night worrying about our results, we like to think that getting more than 1,000 views – from 1,000 different people – tells us something about the world.

Right now, almost 50% of you are telling us one thing: That weak-specced consoles are killing the gaming market.

The PlayStation 3 and XBox 360 use computer technology from the (relative) dark ages. The Wii’s tech is even older.

Imagine that you’re a game developer – faced with the prospect of a simultaneous launch on PC and console. What levels of image quality would you aim at?  Right now, you’d have to focus the majority of your effort in making sure your game could be sold across as many different platforms as possible. When it comes to making decisions on how to spend your R&D budget, the weight must go onto ‘How can we make this look good on a GPU that’s 7 generations old?’

The knock-on negative effect is far reaching. While PCs have evolved toward downloadable content, consoles rely on customers making their way into the high street to buy from Game, HMV and all the other specialist retailers.

But ‘Whoops’ – they’re now all dead and dying.

Even Nintendo, with its antiquated visual imagery, has moved from incredible profit to incredible loss and it’s legacy of ‘alternative interface technology’ has only made matters worse. On 30th November, it will launch the Wii U update to its once popular home entertainment solution. It will have a 5000 series Radeon graphics core, which means it will only be 3 generations old at launch. If it drives basic graphics at 1080p, then Nintendo will be happy. Apparently.

Microsoft Kinect and Sony Move may well have brought a spate of new games to the old consoles, but the terrible side effect has been an extension of the life for the tired old PS/3 and XBox 360 consoles by 12-24 months. That 1-2 year extension means technology moving from ‘old’ to ‘ancient’, with no amazing visual experience coming along to shake up the industry.

Without the visual impact that an amazing new game can bring, the buying/playing decision comes down to the ‘user experience’. At that point, online games take over – with Warcraft, Starcraft, Roblox, Star Wars and Adventure Quest World – ahead of games for younger players like Disney’s Club Penguin.

How popular are these online games?   Walk through any modern supermarket and you will see entire racks of ‘Game Cards’ available for sale at £5, £10, 20 or more. These cards are purchase with real money – to give you virtual money in an online game. If you’re not sure what kind of threat that poses for Microsoft, Sony, Nintendo et al – just take a minute to calculate the profit margin on selling things that don’t exist.

If the gaming experience you want, exists online and requires no special hardware – then how can Sony and Microsoft ramp up huge campaigns for 2013 around the XBox 720 and PlayStation 4?   Not only do you need to market the hell out of the consoles themselves, you also need to get a ton of games written for your platform – to show that you are the leader.

Almost universal is the feeling within the market that the present generation of consoles is likely to be the last [We will go more in-depth into this possibility soon – Ed]. TVs and smartphones will have too much in-built technology to require another generation of separate, dedicated gaming hardware to be released around 2018.

It has been almost 7 years since Sky launched its HD service for TV. In that time, the price of a decent TV has dropped like a brick. Gone at the days when new TVs cost thousands of pounds. You can now pick up a smart looking 40″ Samsung 3D  TV with backlit LED technology for less than £500. Surely TV companies can’t be happy with that set up?

As a final note, it’s worth saying that almost one third of you blame lazy developers, who can’t be bothered to break out of the conventional game zone and be truly innovative.

KitGuru says: We have spoken with experts and discussed how the console companies have only themselves to blame, that the new products needed to have been launched by now. But, at the same time, some blame needs to land with the TV companies. By refusing to move past 1080p, they have fixed the resolution at which game developers need to aim for the mass market – and it’s a very low bar. Meanwhile AMD and nVidia need amazing new games to drive their graphic card sales forward or they will have problems. Upshot?  The stagnation seems real and it seems to have a negative affect on lots of people. We can’t see a Nintendo U-turn in market fortunes coming. 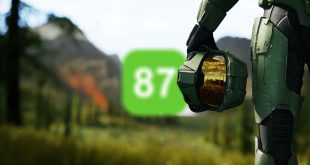