Will Kinect-less Xbox One help it rival PS4?

In-case you hadn’t heard, Microsoft announced last night that it was going to be selling an Xbox One without its Kinect motion tracking camera. This is perhaps the second biggest U-turn the company has taken since the original announcement of the console, where after endless backlash, it went back on ideas for it to be always on and always watching. The Kinect however stayed, with Microsoft suggesting it was absolutely necessary for the machine to operate as intended, but as expected, it drove up the price, leaving the PS4 as a much more affordable option for next-gen gaming. Without the camera though, Microsoft is bringing the price down, making it more competitive.

It’s not shaving off hundreds of pounds of course, but the price is dropping $100 in the US from $500 down to $400 and here in Blighty, the price is coming down to £350. That’s not quite such a drop, since you can find the system at some retailers for only a bit more than that now – and that’s with Kinect – but it’s still brings the XBox One in line with the PS4, which is where it clearly needs to be.

A version of the Kinect sensor will be made available later this year, as a standalone upgrade option. 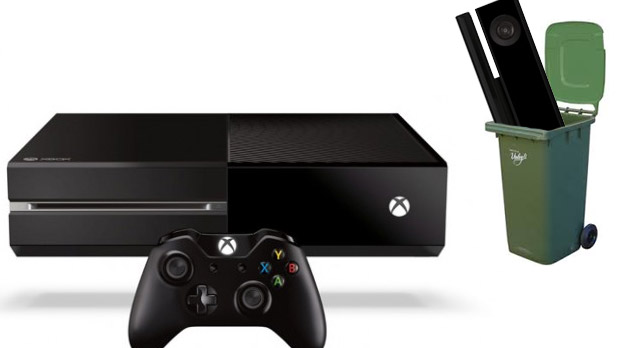 As it stands, Sony is easily winning when it comes to system and game sales, with consumers picking up over seven million of its latest gaming machine since release late last year. Comparatively, the last stats we had from Microsoft were that it had “shipped,” five million. While no doubt most of those will have sold to consumers, shipped simply means that number had been sent to retailers. There’s at least a two million machine gap and that could snowball if Microsoft doesn’t somehow wrestle it back.

In another move to try and draw gamers away from the Sony crowd, Microsoft is also changing up its free games with Gold subscriptions system. Moving forward, it’ll offer four free games a month, two for the Xbox One and another two on the Xbox 360. The first ones offered, according to Eurogamer, will be Max: The Curse of Brotherhood, Halo: Spartan Assault, Dark Souls and Charlie Murder. There’s also set to be an extra bonus launch title, Super Street Fighter 4: Arcade Edition.

The question is, will any of this work?

KitGuru Says: Does the price drop, lack of Kinect camera and extra free games make you guys any more likely to buy an Xbox One?