Microsoft’s Xbox One sales are on the rise but the console still needs a bit of a kick if it is going to catch up to the Playstation 4 this year. Microsoft is currently offering select Xbox 360 owners $75 of credit to put towards games, DLC or even movies as long as you buy an Xbox One this month and register with Xbox Live.

A lot of last generation console gamers have yet to switch but Microsoft is willing to sweeten the deal for potential upgraders. The offer was first spotted by NeoGAF user, BeforeU. 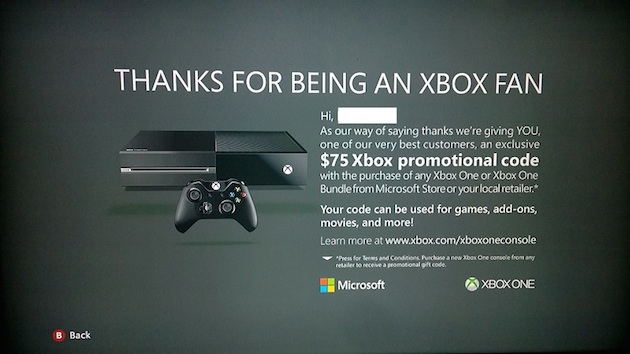 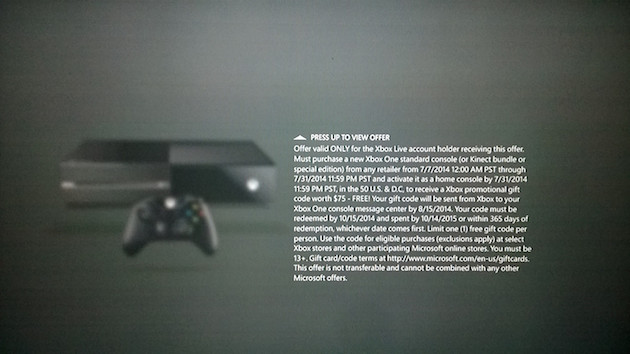 The offer isn’t available to everyone, it looks like Microsoft is targeting a subset of US based Xbox 360 owners at the moment. The terms state that they will need to buy an Xbox One before the 31st of July and register it as a home console in order to receive the promotional code.

There are no limits on which retailer you buy the Xbox from though, it can be from any retailer or direct from a Microsoft store. You will only have until the 15th of October to redeem your free credit.

KitGuru Says: The Xbox One didn’t get off to a great start but it has forced Microsoft in to taking a consumer friendly approach and it is working. If all goes well, this will put pressure on Sony, which will lead to better deals for all gamers.

Previous Ubisoft: ‘DLC is pretty much accepted’
Next EA releases statement on pools not being present in Sims 4