The PS4’s first big update came yesterday, bringing with it one of the most requested features- an HDCP off option. Unfortunately though, the toggle applies to all apps, meaning that when HDCP is off for gameplay recording, you will have to remember to switch it back on to watch any video apps.

HDCP is an encryption used to stop people recording the signals from their TV sets, which stopped a lot of gamers from being able to record gameplay footage on the PS4 with a capture card of their choice. However, such encryption is also required to stop piracy of TV shows and movies. 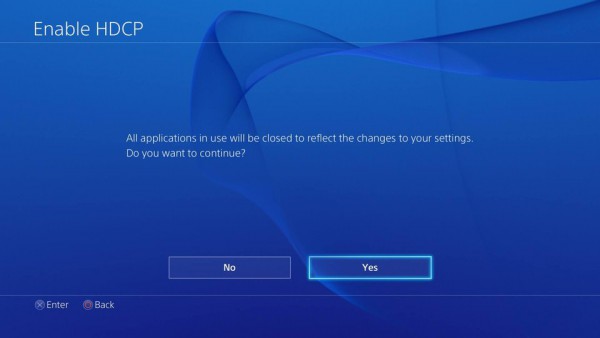 Sony’s implementation of HDCP just seems a bit cumbersome, instead of having the software automatically enable HDCP while not gaming, you have to manually turn it off and on whenever you want to switch between recording and watching Netflix, Amazon Instant Video or even YouTube, which is a time waster that will likely annoy some.

The Xbox One features dynamic HDCP which enables itself while in certain apps and disables while gaming, something Sony probably should have considered doing itself. Last generation consoles featured HDCP encryption but it was possible to get around it by using component cables rather than HDMI.

KitGuru Says: While having to manually toggle HDCP encryption isn’t the worst thing in the world, it does seem rather unnecessary when Sony could have had the OS automatically do it.