Assassin’s Creed Origins has many editions, from £55 to £700

Ubisoft is no stranger to special editions with most of its games launching with more than one. Assassin’s Creed Origins has taken this to the next level with at least 5 special editions, one of which costs a whopping £700/$800.

The £700 bundle is named Dawn of the Creed – Legendary Edition, limited to just 999 units across the world. The Legendary Edition includes most of the stuff you would expect such as the main game, deluxe pack and the season pass as well as physical goodies like a world map, the soundtrack, art book, art cards, lithographs and perhaps most importantly the eagle skull amulet and 73cm figurine. The figurine in the £120/$160 Dawn of the Creed edition is of course half the size but strangely the main jump in cost seems to be that the Legendary Edition casts the figurine and amulet in resin. 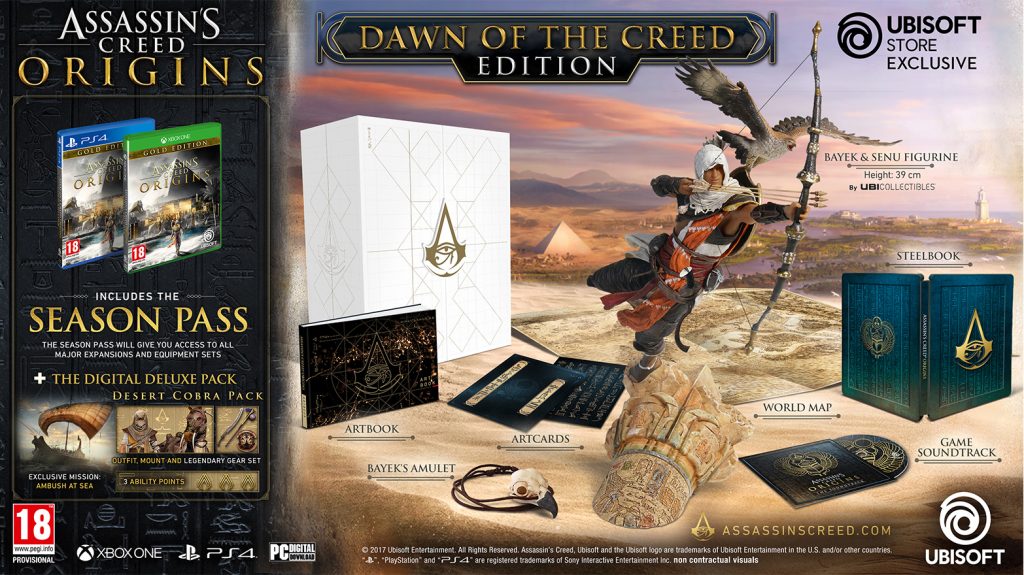 Perhaps the worst part is that for the price, you would expect the Legendary Edition to pack all the content of the previous editions, in which their combined total doesn’t even come close to the £700 mark. Unfortunately, the God’s Edition, Dawn of the Creed Edition and Dawn of the Creed Legendary edition all come with their own exclusive figurine, meaning that unless you are to spend a total of £905, you are guaranteed to miss out on some of the collectables.

Assassin’s Creed Origins is set to release on October 27th. For more information on each version, as a guide is necessary this time around, check out the Ubi Store.

KitGuru Says: The Legendary Edition is certainly only for the most die-hard fans of Assassin’s Creed, but it is still difficult to justify the cost.  Do you think this has value for money?