The long-awaited Darksiders sequel is nearing completion, with PC, PS4 and Xbox One players stepping into the shoes of the third Horseman, Fury, on November 27th. Darksiders 3 marks THQ Nordic’s biggest release since its acquisition of THQ assets back in 2013, marking the occasion with a number of limited editions.

Having followed War and Death in the first two entries, Fury takes centre stage in Darksiders 3, questing across Heaven, Hell and a post-apocalyptic Earth in order to take down the Seven Deadly Sins and their underlings. Despite the Charred Council calling upon her to “restore the balance between good and evil,” her true motivation lies in proving she is the “fiercest of the four horsemen.” 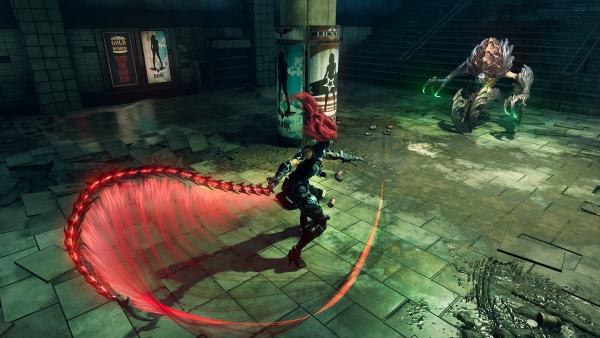 Based on her novel counterpart, Fury replaces Famine in the Biblical interpretation. She is the only member of the Nephilim, Darksiders’ name for the race of the Horsemen, that bears no resemblance to the counterpart she replaces. Strife, the fourth and final member of the Nephilim that remains unseen in the video games, still bears a likeness to Conquest of the lesser popular Biblical Horsemen concept.

Darksiders 3 is currently available for pre-purchase on Steam and GOG, with the standard edition costing £45/$60 and the Deluxe Edition, containing two paid DLCs and the soundtrack for £59.99. Those quick on the draw will be able to get 13 percent off the Deluxe Edition, however, costing just £52.49 until its November 27th release.

Hardcore fans can choose between two premium versions. The Collector’s Edition contains a 10-inch Fury figure, steelbook case, soundtrack, artbook and “exclusive armour DLC” alongside the game for £129.99/$149.99. The Apocalypse Edition carries all of this over, adding in a 40-inch by 30-inch wall scroll, a Horseman Logo ‘Amulett’ and three more 10-inch figurines of War, Death and the merchant Vulgrim for a staggering £349.99/$399.99.

KitGuru Says: Once Darksiders 3 releases, that just leaves the story of Strife if THQ Nordic opt for another sequel. Fury is up first, however, which will no doubt offer another different experience just as Death did moving on from War. Are you excited for the return of the Darksiders series?