Total War: Rome 2 been hit with a plethora of overwhelmingly negative reviews this week, in a review bombing effort to ridicule the developer for supposedly increasing the spawn rate of female generals. Developer Creative Assembly has since responded to the accusations to tell those bothered by the alleged change that it never actually happened.

Despite its 2013 launch, Creative Assembly’s Total War: Rome 2 still enjoys quite a sizeable player base, maintaining its position in Steam’s Top 100 games. Over 1,500 overwhelmingly negative reviews threaten the game’s position after a discussion arose earlier this year surrounding the game’s historical accuracy with the inclusion women generals.

Appearing in March and becoming a staple argument by August, the modding community responded by releasing the Patriarchy Mod, intending to bring down the spawn rate of total females in the game as a whole. Comments across threads were increasingly aggressive, prompting a lone developer to lock the original topic and post a response.

“As has been said previously: Total War games are historically authentic, not historically accurate,” they explained. “If having female units upsets you that much you can either mod them out or just not play.”

The vocal portion of the community involved in the debate didn’t appreciate the representative’s statement, dubbing it “needlessly aggressive” and took it to mean that those unhappy with the news shouldn’t buy Total War: Rome 2. “People can't refund the game, five years into the game's lifecycle, and you're telling them to mod it out of the game or stop playing if they don't like a change that you made without warning,” said YouTuber RepublicOfPlay.

This, in turn, kicked off a stint of review bombing against the title, a practice which has been known to project the voices of those unhappy with a developer’s direction. The problem with this story, is that Creative Assembly didn’t actually make any changes and that spawn rates are working as they always have done.

“There have been no changes to recruitable female general spawn rates. But with the addition of the family tree feature and the new gameplay options it brings, playable factions may gain more female family members via marriage,” states Creative Assembly. Of course, different factions do differ. While “the Greek states, Rom, Carthage and some eastern factions” have a 0 percent chance of spawning women generals, Kush has a 50 percent chance and the remaining factions sit between 10 and 15 percent. 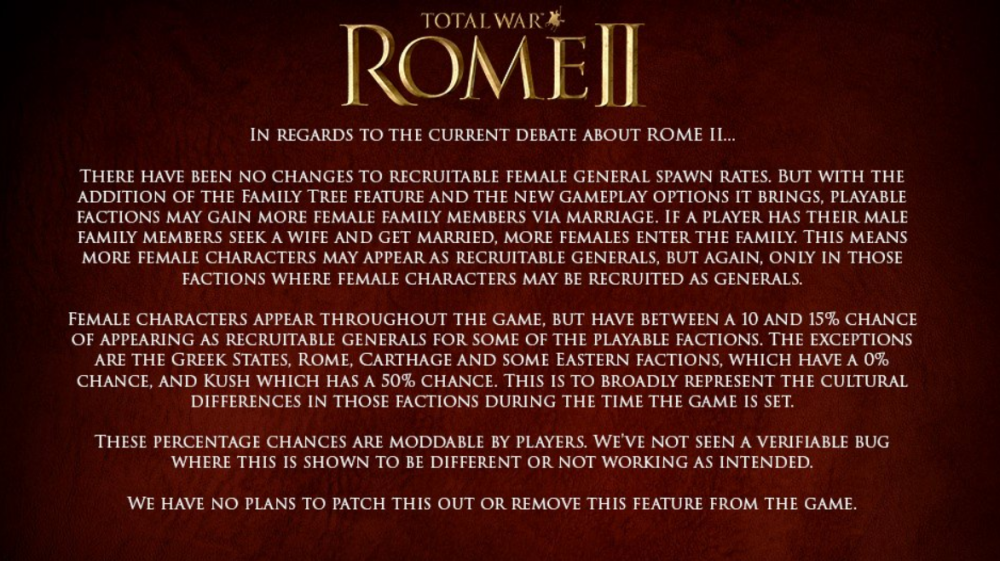 Reiterating the original statement, Creative Assembly draws player attention to mods, stating that the “percentage chances are moddable by players” and that it has not observed any “verifiable bug” that things aren’t working as intended. “We have no plans to patch this out or remove this feature from the game.”

Not only is this fuss surrounding something that remains unchanged, but Creative Assembly never once said not to buy its game or made it impossible for those affected by the ‘news’ to play. There are always options to cater user experience, with mods readily available. It seems that the developer will continue to suffer because of this for quite some time as the review bombing is still in full effect. Sadly, that just means new players are less and less likely to buy the aging title, meaning returning players could likely suffer in future.

KitGuru Says: I can’t pretend that this controversy makes sense to me. The majority of negative reviews come from users that had not played the game in quite some time, making it a harder pill to swallow that they could have witnessed any changes first hand. How do you feel about the recent controversy?