Fake $5 Cuphead made its way past Apple’s iTunes screening process, onto iOS

Cuphead has made waves this year, nominated and taking awards home for Best Debut Indie Game, its score and, of course, it’s art direction. Needless to say, people were thrilled to see that the title had broken its Xbox/PC exclusivity and come to iOS for $4.99, except this version is unfortunately fake.

Its support page liked to “studiomdhrgames.com,” instead of StudioMDHR’s actual site, “studiomdhr.com,” with the former only being set up two months prior to its supposed iOS release. This fake website was routed through Hungary under the name ‘Walter Gregor,’ when StudioMDHR is a Canadian company with no one by that name under its employment. 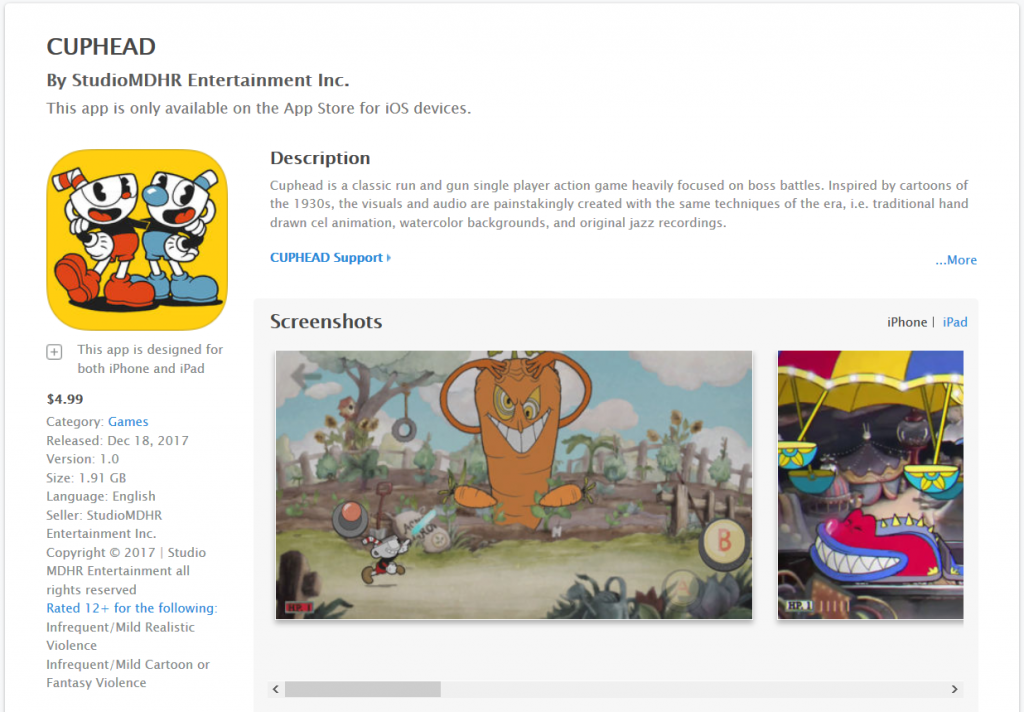 Furthermore, a quick domain search via Whois Record shows that the Registrant Org is listed under ‘Sheridens Ltd’, a company associated with other ripped off titles including an unofficial mobile port of Gang Beasts.

The application has since been removed from the iTunes store, and the dodgy website is seemingly down too. Apple has declined to comment on whether or not buyers will be entitled to a refund for their fake purchase.

KitGuru Says: The game was actually playable to a point, despite the hardcore title not translating well to touchscreen controls and the resolution being even blurrier than usual – this time not for the old-timey effect. For those that have yet to try out the real version of the game on the Xbox One or PC, it is well worth your time but be warned, it is more difficult than you’d initially think.

Previous AMD’s next-gen GPU has been spotted in Linux drivers
Next Monster Hunter: World gets another beta & talks of 50-hour story gameplay