Ahead of its release, Metro Exodus was review bombed on Metacritic as many protested its sudden shift from Steam to the divisive Epic Games Store. In a bizarre change of pace, it seems as though thousands of positive reviews have been flooding Steam itself despite the post-apocalyptic shooter not coming to the platform until 2020.

The Metro series is no stranger to positive reception and 4A Games’ latest is no exception. Metro Exodus is currently trending at 84% on Metacritic, 83% on OpenCritic and now an influx of reviews has changed its Steam rating to “Very Positive,” as noticed by Eurogamer. Make no mistake, this is far from fans forgiving publisher Deep Silver’s decision to abruptly remove the game from Steam for the next 12 months, but it is an effort to give credit to the developers who have supposedly crafted “something uniquely beautiful.”

“Genuinely, one of the best story driven games I have ever played,” said Steam user Nuka Cola. “A shame that the publishers, not the devs, messed up the game's success by choosing to take the cash and push the game to the Epic Games Launcher. Would definitely say that this game is worth the purchase, if it ever comes back to Steam.” 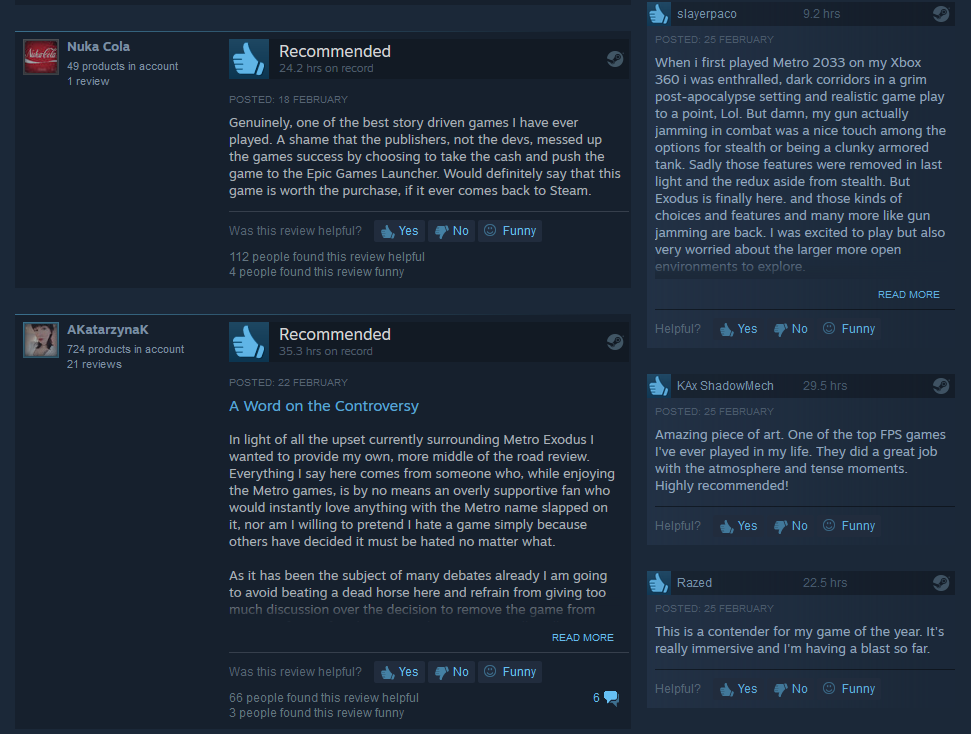 Given that Exodus is billed as more open than its linear predecessors, it’s understandable that many players had some feedback on the design. While some felt as though the open world was balanced, others criticised the world design for being emptier than other games that follow similar themes, filled with “running huge stretches of land to finally do something in a faraway town,” according to BlindSyde.

Sadly, unlike the handful of fulfilled Steam pre-orders that went fulfilled, Epic Games Store users currently have no in-house outlet to voice their opinions. Epic states that it has plans to add a review system of its own, allowing developers to eventually opt in or out before a game is released. “We're experimenting with other mechanisms to improve this further,” explains Epic owner Tim Sweeney. Until then, those wishing to review Epic Store exclusives will have to use alternative platforms.

KitGuru Says: Now that players have had time with the game, it looks like the quality is speaking for itself. This is hardly surprising, as Metro has a history of polish that isn’t quite met by its upbeat US-based rival Fallout. Still, for so many positive reviews to appear on Steam is quite shocking, considering it is a place of contention at the moment. Have you played Metro Exodus? What are your thoughts, without spoilers?