Two years later, Ubisoft turns The Division into a success with 20 million players

Despite being dubbed as one of Ubisoft’s fastest selling games ever, Tom Clancy’s The Division managed to lose 93 percent of its player base in the first two months of its release. It looks like the publisher has managed to turn things around, however, as its shooter now boasts a sizeable 20 million players.

This is the second title in Ubisoft’s games-as-a-service library that the publisher has managed to fix after noticeably stumbling at launch. Tom Clancy’s Rainbow Six Siege followed a similar path, being dubbed as a failure only to rack up 25 million players near the end of its Year 2 seasonal run. 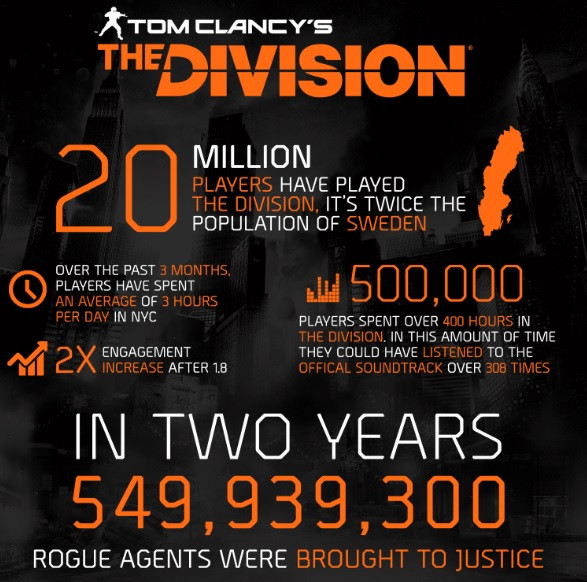 The Division seems to be treading the same path, as Ubisoft reports that 500,000 players have spent more than 400 hours in the game, killing a total of 549,939,300 enemies (rogue agents) in the process. A lot of this activity has come as a result of Update 1.8, which launched for free early in December last year. Since then, players have spent double the time engaging with the title, with players spending an average of 3 hours per day in the past three months alone.

These numbers are incredibly impressive for a title that dipped from its 6.4 million beta players to its Steam numbers showing lower than 150,000 active players two months after launch. The game hit its 10 million player milestone in May 2016 and continued its positive trend in numbers by the end of that year, all thanks to Ubisoft keeping its ear to the ground, adapting its games accordingly and offering free content. 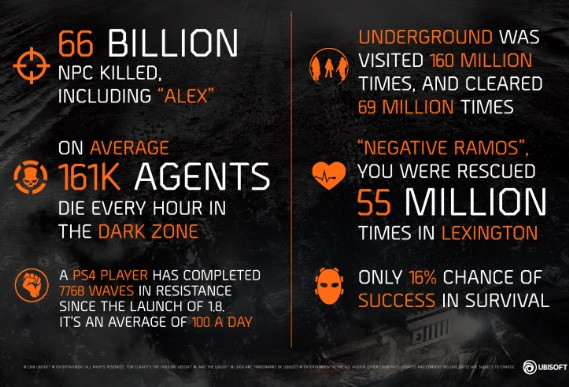 “We are very proud of what we have achieved during these past 2 years. Listening and giving back to the community has always been our first objective and we would like to thank all The Division players for their valuable feedback and their support,” said creative director Julian Gerighty in a statement.

KitGuru Says: This spells good news moving forward as it is further proof that Ubisoft has been listening to its fan base and giving players what they want. Hopefully, this reflects well for its other games-as-a-service titles such as For Honor, which does seem to be making improvements of its own, slowly but surely. Are you still playing The Division?