Valve has found itself in a spot of bother, after the controversial video game Active Shooter was published on Steam Direct. The title allows players to assume the role of a school shooter, which has attracted criticism in the wake of the Santa Fe High School shooting in Texas just one week ago.

In its current state, Active Shooter allows players to assume the roles of a SWAT team member attempting to take down an armed assailant within school premises, or as the perpetrator actually shooting children within the school. There have also been plans outlined to add a survival mode, allowing players to step into the shoes of a civilian that needs to “escape or perform a heroic action such as fight against the shooter itself”.

If developer Revived Games and publisher Acid plan to release the title on the 6th of June, as per its current Steam listing, then they’re going to have to fight off numerous protesters in order to do so. UK-based charity Infer Trust has spoken out against the title, calling for Valve to address the issue.

“There have been 22 school shootings in the US since the beginning of this year,” an Infer Trust representative told the BBC. “It is horrendous. Why would anybody think it's a good idea to market something violent like that, and be completely insensitive to the deaths of so many children? We're appalled that the game is being marketed.” 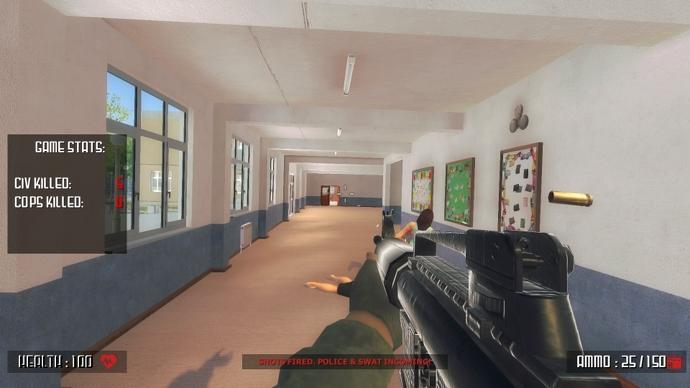 Infer Trust is not alone in its views, with anti-gun lobbyists and half of the community at large calling for Active Shooter to be pulled for setting a bad example, let alone the insensitivity of the issues it portrays.

Publisher Acid reasoned with the protesters stating that “this game does not promote any sort of violence, especially any sort of a mass shooting. While I can see people's anger and why this might be a bad idea for the game, I still feel like this topic should be left alone.”

“As I mentioned in Steam discussion forums, there are games like Hatred, Postal, Carmageddon and etc., which are even worst compared to Active Shooter and literally focus on mass shootings/killings of people,” continued Acid, which has also published White Power: Pure Voltage and Tyde Pod Challenge.

Hatred went through a turbulent release, temporarily disappearing from Steam Greenlight before returning. Valve has yet to address Active Shooter, the waves of critics or the publisher, as Acid has reached out for further clarification after feedback from the public.

“After receiving such high amount of critics and hate, I will more likely remove shooters role in this game by the release, unless if it can be kept as it is right now,” concludes Acid, suggesting that the removal of the mode will likely have to be forced rather than a choice it and the developer would make.

This does call into question whether or not Active Shooter went through any review process during its induction onto Steam Direct, which seems to allow any title to be published provided the $100-fee is paid up front.

It’s possible that Active Shooter could be in breach of Steam’s terms and conditions, which currently prevent “content that is patently offensive or intended to shock or disgust viewers” or “content that exploits children in any way.” Given the deaths of 10 people in last week’s Santa Fe High School shooting, along with a further 13 wounded, it’s safe to say that this is considered offensive among the majority.

KitGuru Says: Censorship is a tricky subject when it comes to creative expression. Should Active Shooter be changed based on its potential to influence the fragile minded through interactive experience or should Acid and Revived Games be free to put out any content they choose to?