Wolfenstein 2 is gearing up for its release this October 27th, stirring up quite the controversy in its wake. It seems that despite the countless video games in which players are pitted against Nazis, people are riled up at the in-game political messages found within Bethesda’s upcoming title.

This has prompted backlash from Bethesda’s more conservative fans who take offence to the association between the historical travesty and the modern day president. The outbursts originated on Twitter, commenting on the same post with things like “Oh wow, what a clever marketing trick: tapping into hysterical leftist power fantasy” and “Cool. Didn’t know Bethesda teamed with SJWs and ANTIFA!”

Of course, this wasn’t bound to Twitter for long, with slander for the company appearing across all social media sites, particularly in various subreddits. This angst towards real-life association didn’t originate from the Twitter post, however, with many fans taking issue with how the media is portraying the title’s political relevance to the modern day.

Developers MachineGames has constantly maintained that this game isn’t political commentary on real world events, but a depiction of alternative history and that’s it. Despite this, Bethesda has stated in an interview with GamesIndustry.biz that it is aware of the relevance the game has since the rise of white nationalism has risen in the US and other Western territories.

“We’re certainly aware of current events in America and how they relate to some of the themes in Wolfenstein II,” said vice president of public relations and marketing at Bethesda, Pete Hines. “Wolfenstein has been a decidedly anti-Nazi series since the first release more than 20 years ago. We aren’t going to shy away from what the game is about. We don’t feel it’s a reach for us to say Nazis are bad and un-American, and we’re not worried about being on the right side of history here.” 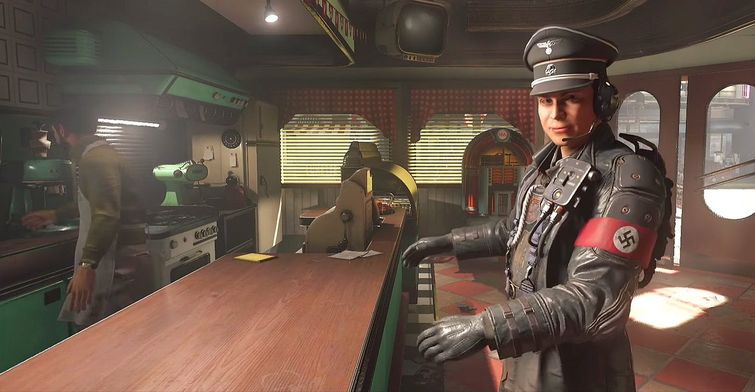 KitGuru Says: I know many gamers take issue with real world relevance of games nowadays, but some find that it gives a good platform to talk about current issues for those that would otherwise ignore situations around them. Do you think that Bethesda made a blunder by trying to make its in-game world “Nazi-Free Again?”