There has been more fallout from the ‘blitzchung’ Hearthstone saga. An American University collegiate Hearthstone team has received a belated suspension after holding up a banner in support to the Hong Kong democracy protests and fellow Hearthstone player ‘blitzchung’.

‘blitzchung’ was handed a one-year suspension from Hearthstone competitions and lost his season two earning (this was later dialled down to a six-month ban, after uproar from the Hearthstone community). Initially, the collegiate team went unpunished for their banner protest. However, Blizzard has now dished out a six-month ban for their actions. 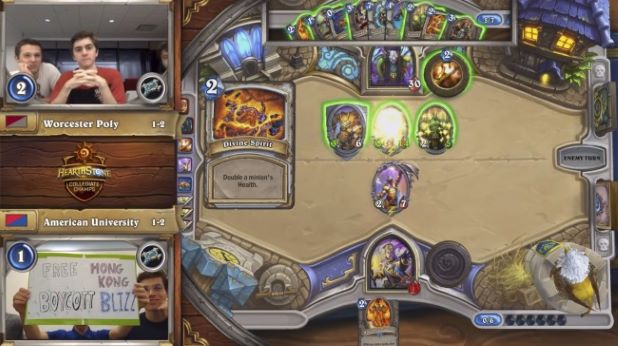 In a further statement, Blizzard said the following: “We strongly encourage everyone in our community to share their viewpoints in the many places available to express themselves. However, our official broadcast needs to be about the game and the competition, and to be a place where all are welcome,”

According to PCGamer one of the players involved in the banner protest, Casey “Xcelsior” Chambers, later said on Twitter that the team was effectively looking for trouble, and appeared to have no regrets. “This one was pretty cut and dry. We knew what we were doing and expected the punishment,” he wrote. “The problem was Blizzard ignoring our protest for PR reasons but going after Blitzchung.”

KitGuru says: I have a feeling these protests are going to continue for some time. Blizzard and Hearthstone may soon find themselves in a tricky situation where future tournaments are regularly disrupted until the community feels better about how the situation is being handled.