Back in May, Microsoft revamped the Xbox Game Bar with a new UI, Spotify integration, and social and streaming features. Now, to complement the overlay, Microsoft's dropping the October 2019 Xbox Game Bar Update adding a customisable performance monitor and achievement tracking tools. These features were added based on the Xbox and Windows Insiders' feedback.

The performance monitor includes an FPS counter and a system resources usage monitor, all in a customisable user interface. Regarding the achievement tracking features, it's possible to pin your progress on selectable achievements, and check your “game’s achievement list and individual achievement details.” The achievement notifications will pop on the Xbox Game Bar instead of the Xbox Console Companion. 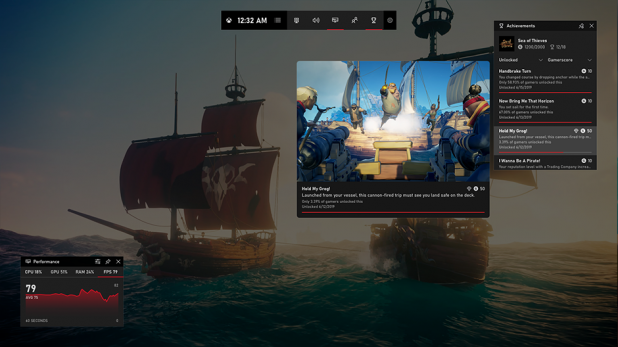 The update to the overlay will be automatic for everyone, but you can force it on the Windows Store. To show the overlay, just hit “Win+G.” There you will find these features and more to try.

Microsoft stated that it has “a ton of things in store” for the Xbox Game Bar, and it will show in the coming months. Let's wait and see what other features they'll add.

KitGuru says: This update is a welcome addition to the Xbox Game Bar, especially the performance monitoring tools. Maybe it will make it more widely used by gamers. Do you use Xbox Game Bar? If not, will you start using it after the update?