More than half of all the games ever bought on Steam have only been played for an hour or less. That's according to new stats unearthed by Ars Technica when it did some digging into player profiles, also discovering some other surprising facts about our Steam buying (and playing) habits.

For example, 37 per cent of all games bought have never been played. While that number might seem high, consider the amount of games you've bought as part of bundles, or special sales packs, just because the deal was good – not necessarily because you wanted to play the game right then, though maybe you will later. It often doesn't turn out that way though and the game just sits there in your collection, gathering digital dust.

However if you look at the most owned games, the percentages of players that actually take some time to play them rises dramatically. In the case of DotA 2, the most owned Steam game of them all, essentially 100 per cent of downloaders have at least tried it out. The same goes for Team Fortress 2, the second most “owned” Steam game. But those are both free, which perhaps suggests why they're so popular, though not necessarily why people actually install them and play, at least for a bit. 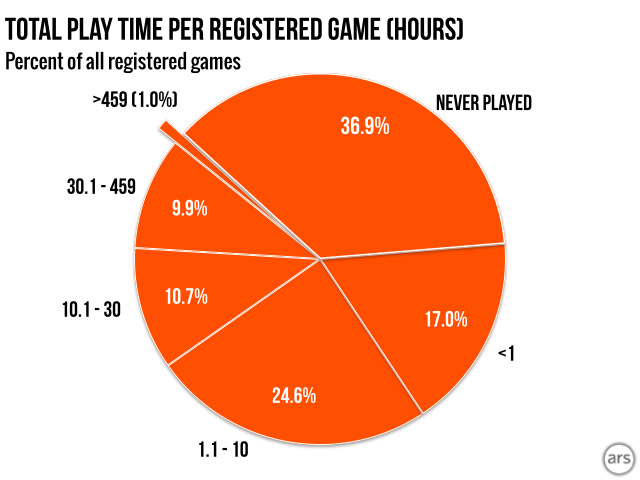 However it does tell us that player numbers are more accurate in measuring a game's popularity, than purchase numbers which can have a big difference when compared. While games like Half Life: Lost Coast have an install base that breaks 12 million, it's player numbers are woefully low (though not tracked until after 2009, which might partly explain why). While Terraria and Planetside 2 may not have such impressive install numbers, they do have over 3.5 million plays a piece.

But when you look at hours played per game, the RPGs and grand strategy games start to dominate. While DotA 2 and Team Fortress 2 top the charts again, Skyrim makes a big splash, likewise Empire: Total War and Sid Meier's Civilisation.

Do you want to know what game people spend the most time on though, beyond any other? The mean and the median average title with the most time spent on any game, is Football Manager 2014. By far. In terms of the median number of game hours, it almost doubles that of Skyrim.

KitGuru Says: There's a load of other interesting stats to be found in the Ars piece, so make sure you check it out if you're a bit of a stat nerd.