You would think that with the advent of virtual reality, gamers around the world will embrace the third dimension of gaming, stepping into fantasy worlds to battle enemies, level up and have adventures with one another; and they will. But as the social side of VR starts to ramp up, it's become apparent that people will also be interested in using their imagination to continue those adventures too, playing tabletop role playing games like Dungeons and Dragons in virtual reality.

Of course that doesn't mean that the experience can't be augmented by its digital medium and that's exactly what AltSpaceVR has done with its new D&D module that's available to all those who step inside the VR hangout tool, if they want it. 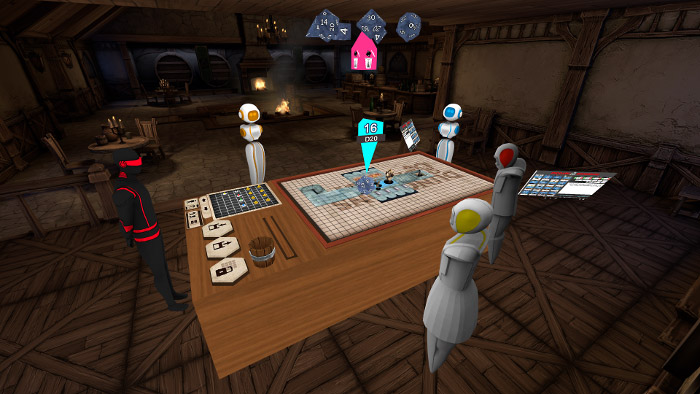 Setting up a tavern as a meeting point for players is as easy as clicking a few buttons. You can set a time to start, and create a private link so that only those who you want to play with can attend. Once within your medieval tavern setting, you'll find a table with a grid, monster figures and props, as well as commands for saving and loading previously built battles.

You can load in maps and backdrops too, meaning you can make your games as prop filled as your real ones if you enjoy creating more immersive campaigns.

Players don't have quite the same hard-access to the world's creative tools – they are mere players after all. However they do get a web browser and document window which lets them view character sheets or look up information if required without having to leave the shared space.

Dice rolls are handled via clicking one of the wide selection of dice hanging above the table, letting players use D100s, D10s, D20s or whatever it is they need.

Although there is certainly the ability to play among friends, AltSpaveVR is also encouraging people that don't know one another to get together for games, providing some tables for public access and the facility to make new adventuring friends in VR.

KitGuru Says: When someone makes a Call of Cthulhu set up, with a suitably Lovecraftian setting, let me know. I have a few one-shots I've built which would be great fun to run in VR.