Two heads are better than one, or so the old saying goes. The point is that when great minds think alike, they can achieve more than their respective parts ever could. Unfortunately though, as much as team-based superhero movies would have us believe, that doesn’t scale up linearly. In fact, once you get beyond a few people it’s clear that the “too many cooks” analogy becomes much more applicable. Especially when you consider the latest Twitch Plays is an attempt to beat Dark Souls. 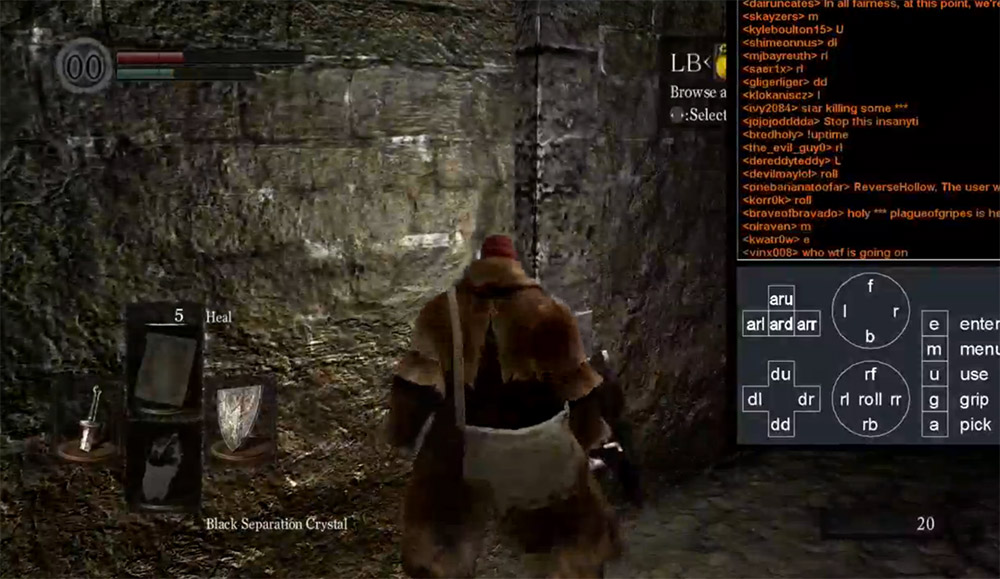 Of course “Twitch Plays X” streams have shown that through persistence and dumb luck, many games can be completed if you bash the buttons hard and often enough. Previously the crowd powered gaming phenomenon has defeated the likes of the Elite Four, beating the entirety of Pokemon Red and various other entities in that universe, as well as Halo and various Hearthstone match ups, so confidence is to be expected.

Yes, a human may have been able to defeat it with Guitar Hero controller, but that’s one man, with the power of his one brain. Twitch Plays Dark Souls, has thousands of minds all screaming to have their commands listened to.

It’s not going quite so well as with other games.

For now, a character has been made – unfortunately a Cleric – and the menu is getting more screen time than the game world, but the hive mind has still managed to get their character up the first couple of floors of the starting area. While it seems unlikely they’ll ever make it to the first boss, let alone defeat it, it’s still quite funny to watch the character rolling into a wall, turning around and repeating it ad nauseum.

KitGuru Says: Good luck to those that are willing to soldier through. It will be ridiculously impressive if this makes it much further.