Valve launched the DotA 2 VR hub right before The International

With The International 2016 kicking off in just a few days' time, Valve has released its promised virtual reality spectator mode for DotA 2. That means if you have a VR headset you can watch the action with others, with an interactive, zoomable map and giant display complete with commentary and highlights.

The DotA 2 VR Hub is entirely free for anyone with a headset to try out the mode, which lets you watch live matches or replays of your choice, with friends or alone, surrounded by the very heroes you're watching battle it out.

Within the hub is an interactive minimap, showing you a summary of all of the action ongoing, as well as a big screen giving you a much better look at individual points of play. Perhaps the most exciting aspect of it though is the ability to place yourself within the game world itself and stand at head-height to see all of the abilities and blows from up close. 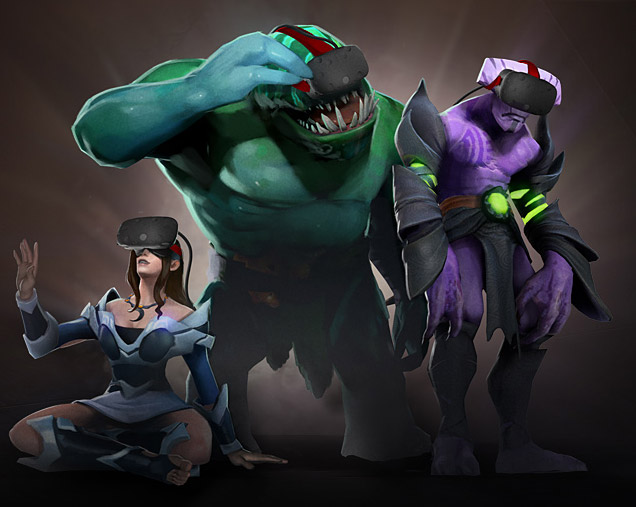 The statues of heroes aren't quite as active just yet, standing passively as you stare at them from probably far too close a vantage point, but animations and a bit of life is something we expect to see added in the future.

One area that is likely to see a lot of interest though is masks. These digital items are used to differentiate users in virtual reality and much like the hats Valve has made so popular in other games and experiences, masks are expected to be a major focus of player interest in the coming months (thanks Ars).

One downside to the whole thing is that right now there is a big bank of fog which really reduces draw distance, which is designed to help the pretty title run smoothly in VR, supposedly. Presumably some PCs could handle seeing the full match fine, but for now if you pop into first person mode within the map itself, you won't be able to see everything.

If you want to try it out yourself, download the VR DLC from the DotA 2 library page in Steam and launch it up with Steam VR powered on and your headset strapped to your noggin.

KitGuru Says: This seems like a pretty excellent idea and is certainly something that a lot of real sports should be employing too.

Previous iPhone sales might be dipping, but Apple just sold its billionth
Next Photographer hits Getty with $1 billion lawsuit for false copyright claim