Bungie and Google team up for Destiny planet viewer

You can now explore the Destiny universe as Bungie has created a planet viewer based on the same technology that Google uses to power its Google Maps and Google Earth services. The new site lets you explore the worlds of Venus, Mars, the Moon and the Earth before the game officially launches next week.

The site isn't the best performer, it's a little laggy and some of the images are a bit blurry but it is still a pretty cool way to take a look at the maps and learn more about the universe. As you explore, a narrator will give you tidbits of information on what you're currently looking at. 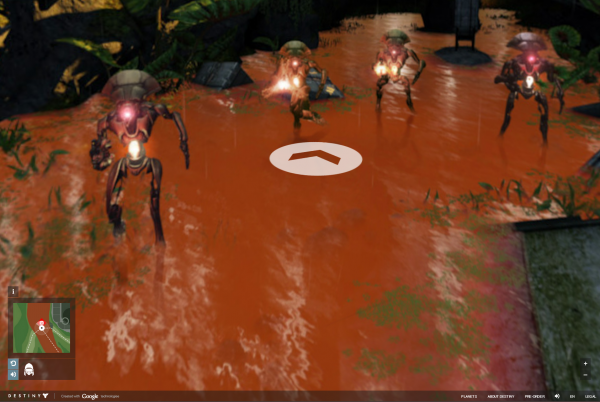 If you're planning on getting really in to Destiny once it releases then it might be worth exploring the planets to find hidden in-game item locations ahead of time. Destiny officially launches next week on the 9th of September for the Playstation 4, Xbox One, Playstation 3 and Xbox 360.

A PC version is rumored to be in the works, although nothing has been confirmed yet.

KitGuru Says: The Destiny Planet Viewer is a neat little marketing idea- it's certainly unique. I really enjoyed the Destiny beta myself, hopefully Bungie announces a PC version shortly after the official console release. Have any of you guys checked out the planet viewer? Are you looking forward to Destiny and did you get a chance to play the beta?