Home / Software & Gaming / Gears of War 4 keys are being revoked

Gears of War 4 keys are being revoked

If you were planning to buy Gears of War 4 on the PC, you may want to stay away from key marketplaces for now as it turns out that copies of the game are being revoked. This has come about after a significant loophole was discovered at some retailers participating in the GTX 1080 and GTX 1070 promotion, in which graphics card buyers are given a free code for the game.

Gears of War 4 currently comes as a free download to buyers of the GTX 1080 and GTX 1070. However, some retailers like Amazon tend to send out promotional codes immediately after an order is placed, which led to an influx of fake graphics card orders, where people would take the code to sell and then cancel the purchase. 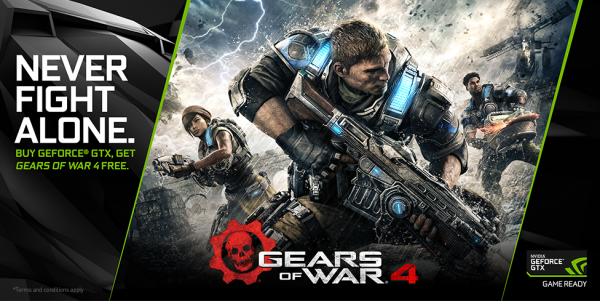 Plenty of NeoGAF users have found their Gears 4 codes revoked after buying from sellers on eBay, so it didn't take long for one of The Coalition's community managers to clear things up, commenting: “We detected some Gears 4 Windows 10 keys were obtained illegitimately via our NVIDIA promotion. We have gone ahead and revoked keys that fell in this bucket. If you believe your key was incorrectly revoked, we highly recommend you contact NVIDIA support with proof of purchase to help out with this”.

So if you're planning on buying Gears of War 4 on PC, you are either going to have to go through official channels or double check that the person you are buying from actually did buy a GTX 1080 or GTX 1070, making the promotional code legitimate.

KitGuru Says: Grey market key sellers often try shady tactics to obtain keys to sell so I'm not surprised to hear that some keys are being revoked. That said, there may be some legitimate graphics card buyers who simply don't want their Gears 4 code, buyers are just going to have to be careful before purchasing, or stick to official stores.