Hackers install Doom on an ATM

Cash machine’s tend to be pretty dull but YouTube user, Aussie50 has found a way to spruce them up a bit by installing Doom on an ATM machine. The in-game actions are controlled by the buttons on the ATM via a keyboard emulating PCB. The video was originally shared by hackaday.

A lot of ATM’s are just computers running a copy of Windows so it shouldn’t be too hard to run the original Doom on the hardware. At the start of the video you get a quick glimpse at what looks like the default Windows XP background, later on you can see Aussie50 enter in an MS-DOS command line- which means that this particular ATM was probably running Windows XP originally but the hacker had to install some MS-DOS emulation software to get things working right. 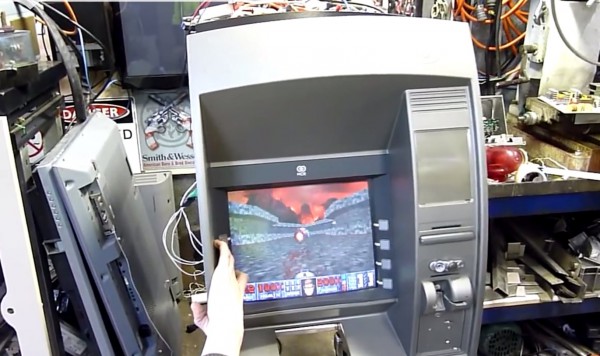 In addition to MS-DOS emulation software, the hacker is also using an I-PAC2, which is a little PCB designed to emulate keyboard commands on arcade machines, which is how he managed to get the ATM buttons to control the game.

The machine’s receipt printer was also working while the game was running although it wasn’t actually utilized in the game at all. With a bit more work, Aussie50 could possibly turn the ATM in to a Doom arcade machine, requiring a deposit before the game runs and printing off a high score receipt once it’s all over.

KitGuru Says: Seeing Doom running on a cash machine is pretty cool, although I imagine it would be difficult to play with just buttons. What do you guys think of this?