Some new information regarding the ever elusive Half-Life 3 has been found in a file within the latest update to Dota 2. Steam Database came across several new files, including one titled ‘hl3.txt’, along with a few other out of place text files, which detail RPG style quest mechanics, virtual reality support, NPC followers and something involving a zipline.

Not every reference in the text file is brand new. Some things are references also found within the Source 1 engine, such as the spawn point generator, which can be found in Left 4 Dead. However, this does mean that Valve might be in the process of porting old tech in to Source 2. 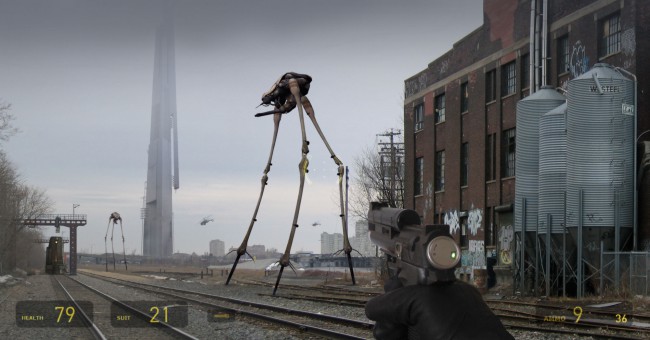 As far as new stuff goes, there are references to a new quest system, which includes dialogue, goals and NPCs including hunters, citizens and ceiling turrets. In the hl3.txt file, we can see that quest citizen is neutral to combines and won’t be hurt by their weapons. This potentially suggests that RPG elements were being incorporated in to a Half-Life game, likely Half-Life 3 given the name of the text file. There are some definitions involving virtual reality support, the patented ‘Chaperone’ system, a movement system and a sequence involving Ziplines.

There are two other text files in the update worth talking about, one called ‘rpg.txt’ and another called ‘lights.txt’. In the RPG file, we find role playing elements defined in Source 2, such as item stats, item pickups, NPC followers, ect. In the lighting text file, you will find definitions for lighting characteristics, with one reference to a “realistic day/night cycle”.

All of the files are linked in this post if you would like to see them for yourself. None of this really confirms anything, but it does offer a small insight in to what Valve is working on right now.

KitGuru Says: With the HTC Vive coming up next year, it would make sense for Valve to have at least one killer title lined up to help sell the headset and show off how great VR can be. These text files don’t confirm much but it does show that Valve seems to be experimenting with RPG mechanics for projects using the Source 2 engine.