Microsoft gives $10 credit to those who downloaded ‘free’ Fallout 4

When it comes to online store listings, mistakes happen pretty much all of the time and people tend to be pretty quick to jump on them. This week, Fallout 4 was mistakenly listed as a free download on the Xbox One and while those that downloaded it won't get to keep the game, Microsoft will be compensating their time and effort with a $10 Xbox Store credit.

Those that did download Fallout 4 for free on the US Xbox Store this week will find that their license has since been revoked, after all, Bethesda probably wouldn't be too happy if it suddenly lost out on thousands of potential sales due to a pricing error on Microsoft's part. On the plus side, those that bothered to take advantage of the error while it was there can save some money on actually buying Fallout 4, or anything else on the Xbox Store. 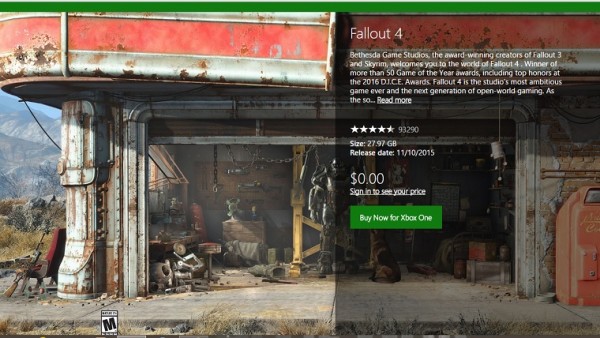 This isn't the first time this has happened. A few months ago, PlayStation 4 players found Fallout 4's Season Pass listed as a free download on PSN. However, this error was also swiftly fixed and licenses were revoked.

Speaking of Fallout 4, Bethesda's E3 press conference is coming up very soon, at which we will likely see more DLC announced for the game. Future DLC will be part of Fallout 4's season pass, which had its price bumped up a bit to accommodate for more content in the future. Those that bought the Season Pass before the price bump will also receive future DLC.

KitGuru Says: Ever since Phil Spencer took over the Xbox division, there has been more of a consumer friendly attitude going around, which is evidenced by moves like this. Free Fallout 4 was too good to be true but those that actually made the effort still got something out of it.