It has been around 18 months since Microsoft first launched Game Pass and around 10 months since the company committed to bringing all future exclusive games to the service on day one. PC players can already access ‘Play Anywhere' titles on Windows 10 with a Game Pass subscription, but the service is set to get a bigger presence on the PC side.

As part of Microsoft's quarterly earnings report this week, CEO Satya Nadella explained that the company is planning to bring Game Pass to PC properly: “Bringing Game Pass to even the PC is going to be a big element of increasing the strength of our gaming community”. Further details weren't shared, but perhaps we'll hear more about this at XO18, which takes place in a couple of weeks. 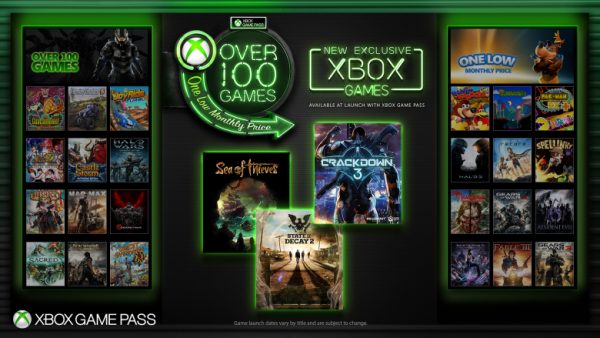 For those out of the loop, Game Pass is Microsoft's Netflix-like service for games. A £7.99/$9.99 per month subscription gets you access to around 200 games both new and old, including Microsoft exclusives like Gears of War, Halo, Forza and more. Third-party offerings include Fallout 4, The Elder Scrolls Online, Rocket League, The Division and more.

Those who already have a Game Pass subscription can play the few Xbox exclusives that have made it to PC so far, including Forza Horizon 4, Sea of Thieves and State of Decay 2. There are rumours that an official Xbox 360 emulator tool may allow for backwards compatible titles to finally land on PC via Game Pass but we don't know that for sure just yet.

KitGuru Says: I've subscribed to Game Pass pretty much all year long. Hopefully a PC launch will bring along access to other Xbox exclusives that have been locked off. Although I would settle for just bringing Halo back to PC.