The Xbox Game Pass launches in June with over 100 games

Update: Today, Microsoft announced that its brand new Xbox Game Pass subscription service will go live to all on the 1st of June. The Netflix style game service grants subscribers unlimited access to a growing library of games for $9.99 per month. However, unlike competing services like PSNow, all Xbox Game Pass games are available to download and run natively on your console, rather than streaming over the cloud.

Starting from today, all current Xbox Live Gold subscribers will get a early access to the Xbox Game Pass library and will receive a 14-day free trial. After that, the service costs $9.99 per month. Standout games currently available via the service include Halo 5, Saints Row 4, NBA 2K16 and Payday 2.

Original Story: Over the last couple of years, EA Access has been available on Xbox One, allowing console gamers access to a growing library of games for a fairly low monthly fee. Now it seems that this new way of delivering games has been successful enough to inspire Microsoft to launch a game subscription service of its own as today, the Xbox team announced ‘Xbox Game Pass’, granting unlimited access to over 100 games from first-party and third-party studios.

Xbox head Phil Spencer made the announcement today and it seems that the Xbox Game Pass is going to play a big role in the future of the Xbox platform. The library will feature both Xbox One and backwards compatible Xbox 360 games from studios like 2K, Deep Silver, Warner Bros Interactive, Microsoft Studios, Bandai Namco and more. 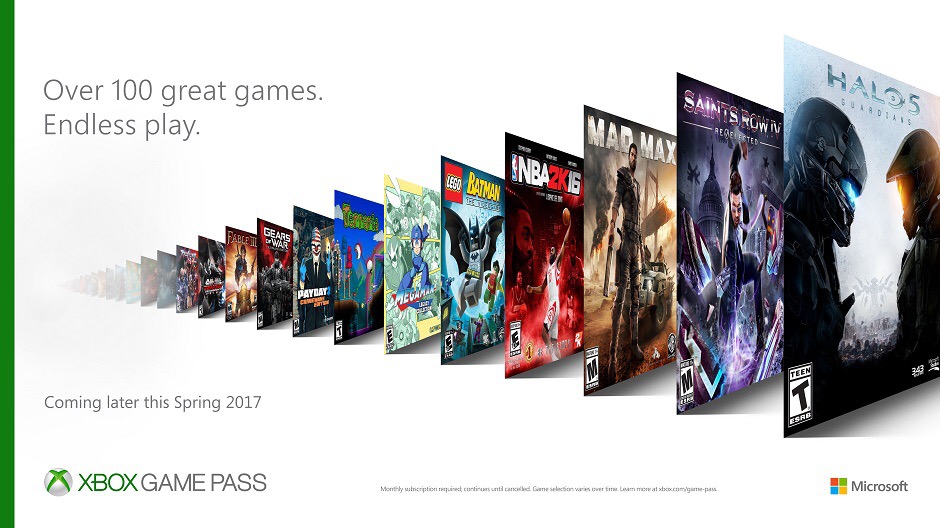 The Xbox Game Pass will be available to those who are part of the Xbox Preview Program starting this week, with a broader rollout to everyone else expected to happen in the Spring. We don’t have a list of every game included in the initial library but we are told that the likes of Halo 5: Guardians, NBA 2K, SoulCalibur II and Payday 2 will be included.

The Xbox Game Pass is part of Microsoft’s build up to Project Scorpio at the end of the year, so we may hear more around then. Microsoft’s subscription will be a bit more expensive than EA Access though, with a price tag of $9.99 per month.

KitGuru Says: If there are enough interesting games included in the library, then $9.99 per month for unlimited access sounds like a pretty solid deal. However, there are still some questions that need answering. Personally, I’d like to see the initial library of games for myself and get a rough idea of how often we can expect new games to be added before I get too excited. What do you guys think of Xbox Game Pass? Are game subscription services the way of the future?