Need for Speed reboot release date may have leaked

A few days back we learned that EA was working on a Need for Speed reboot, set on taking the franchise back to its roots. Obviously at the time, no release date had been officially announced but it looks like we may now have an idea of when to expect the game.

The Xbox Games Store has a habit of accidentally leaking information. This time around, the store listed EA’s next Need for Speed title with a 3rd of November release date, just a couple of weeks ahead of E3, at which we likely would have seen an announcement. 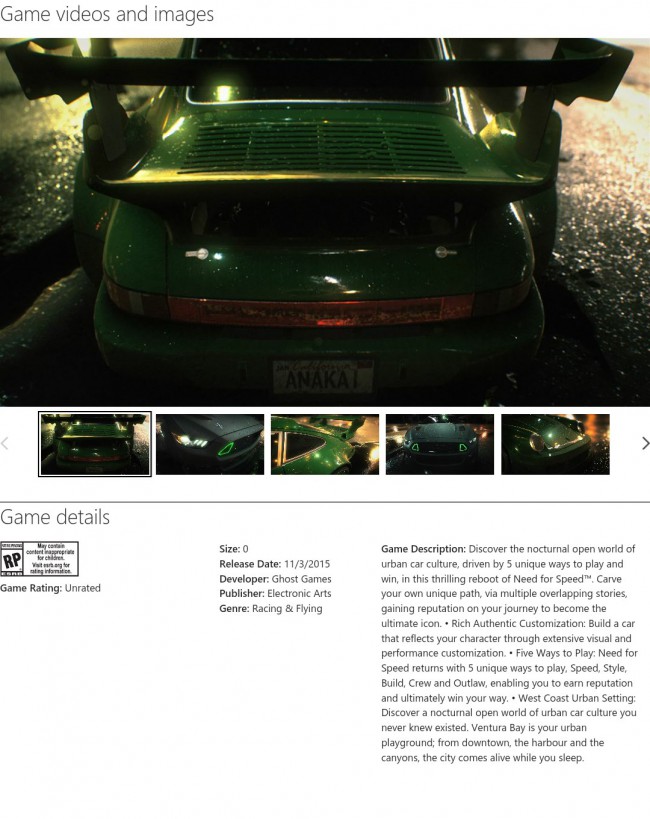 The Xbox Store page was quickly taken down, as is often the case with these things. However, a Reddit user did manage to nab some photographic evidence before the page disappeared for good. The game’s blurb also provided some more details about the game:

“Discover the nocturnal open world of urban car culture, driven by 5 unique ways to play and win, in this thrilling reboot of Need for Speed. Carve your own unique path, via multiple overlapping stories, gaining reputation on your journey to become the ultimate icon.”

The blurb then goes on to boast other features, such as ‘authentic customization’.

KitGuru Says: E3 is right around the corner so we will likely get confirmation of this release date then. At the same time, much like with the Halo leak earlier this week, it is possible that the Xbox Store release date was just a place holder and not final.