Back in 2013, the Tomb Raider reboot impressed us all on the PC side with its graphical features- the game even went on to become one of our ‘go to‘ benchmarks for GPU reviews. Now, after a brief stint as a Xbox exclusive, the sequel ‘Rise of the Tomb Raider' has landed on the PC but does the port live up to the same standard as the original? Let's find out! 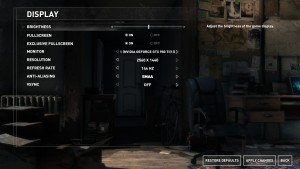 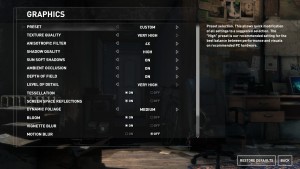 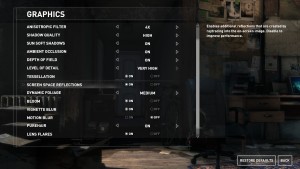 Right off the bat, Rise of the Tomb Raider offers an impressive graphics options suite. In the display options menu, you can crank the refresh rate all the way up and switch between FXAA, SMAA, SMAA x2 and SMAA x4.

In the graphics options menu, you have preset options all of the way up to ‘Very High' with separate sliders for things like textures, shadows and ambient occlusion. Everything that you would expect is present but there are three options that are worth talking about in a bit more detail. 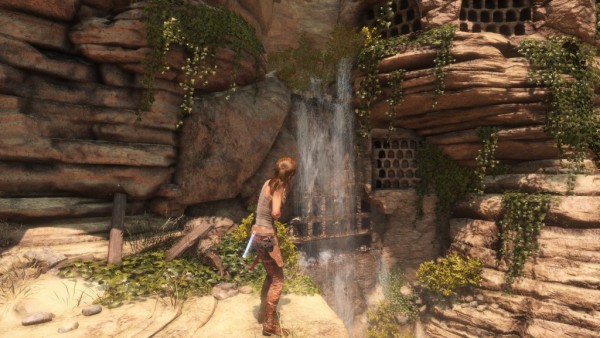 First off, the ‘Level of Detail' slider controls how complex the geometry of the world is, making for more realistic environments and shapes for buildings, cliffs and rocks. ‘Dynamic Foliage' is another important setting as this controls how the objects in the world react to weather effects, so if you want all of the plant life in the world to react realistically to the weather, this is the setting to go to. 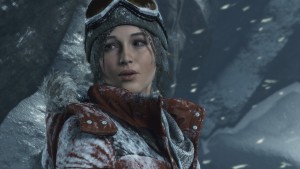 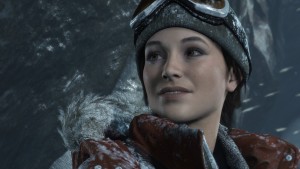 Finally, we come up to ‘Pure Hair', which replaces TressFX from the original 2013 Tomb Raider. Back then, TressFX was the setting that would hurt your framerate the most so for these tests today, I will be running benchmarks with Pure Hair ON and OFF to show the difference in performance. You can see the graphical difference in the two screenshots above. Pure Hair is ON in the left and OFF in the right.

I tested Rise of the Tomb Raider on a system featuring an Intel Core i7 5820K, 16GB of Crucial Ballistix 2400MHz RAM, an Asus X99A motherboard and a Samsung 950 Evo 1TB SSD. I don't review graphics cards for KitGuru but for the purposes of these tests the hardware team have sent me an MSI GTX 970 4G, an XFX R9 390x Ghost Edition and a Sapphire R9 290 Vapor-X to go along with my own Reference GTX 980Ti.

On the Nvidia side, I used driver version 361.75 and for the AMD cards, I used Radeon Software version 16.1. It is worth noting that Nvidia's driver contains specific optimizations for Rise of the Tomb Raider while AMD has yet to release their own driver update for this game at the time of writing. None of the graphics cards in this test were overclocked.

Rise of the Tomb Raider does not have its own inbuilt benchmark tool so for this test, I ran through the opening of the game featuring Lara scaling up a mountain until an avalanche hits. I chose this scene in particular as it does a great job of showing off the game's weather effects, lighting, shadows and textures while also being easy to repeat due to its cinematic nature. I have played quite a bit further than this and can confirm that it is one of the more graphically intense parts of the game.

As you can see in the options menu screenshots above, I am running a slightly modified version of the ‘Very High' preset for this benchmark, with SMAA on but Motion Blur switched off. 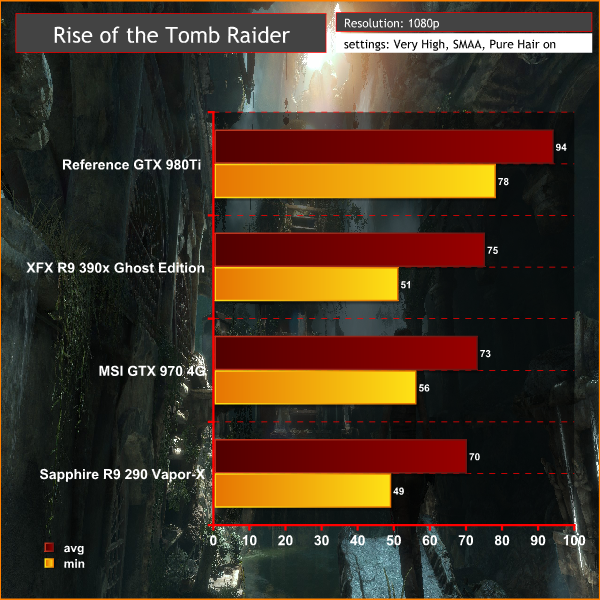 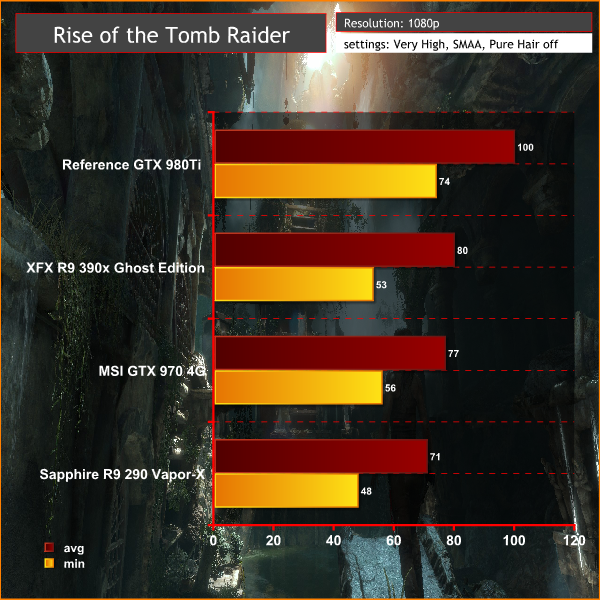 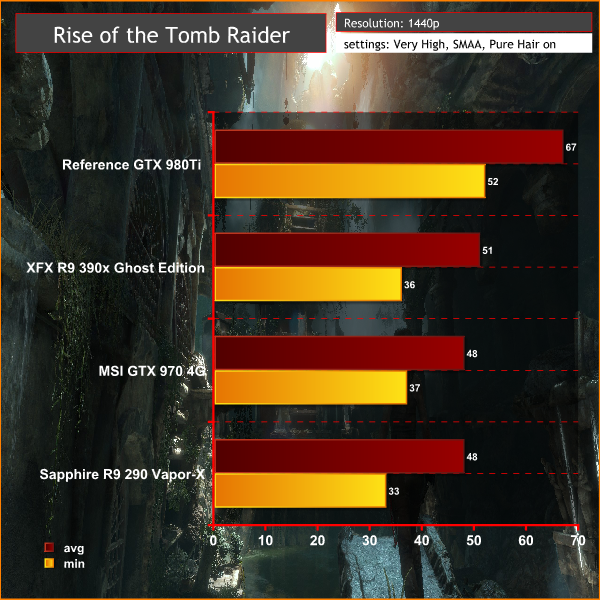 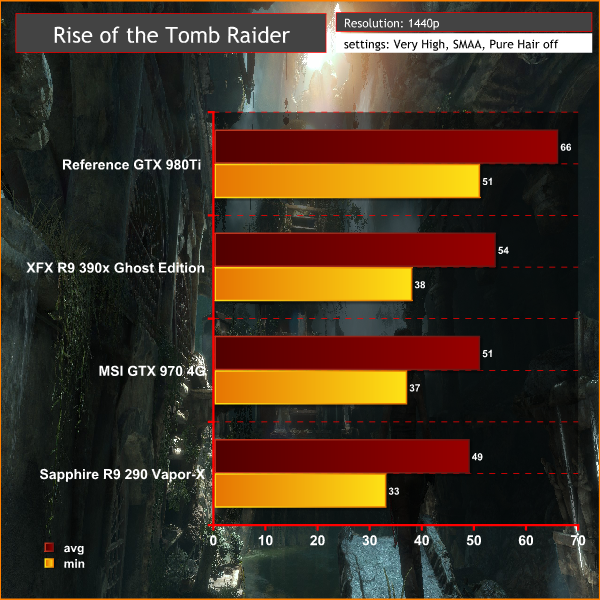 As you can see, Rise of the Tomb Raider is a demanding game both with Pure Hair switched on and off. On average, turning on Pure Hair will cost you around five frames per second but minimum frame rates don't tend to take much of a hit so even on the R9 290, you should be able to hold above 30 frames per second at 1440p. 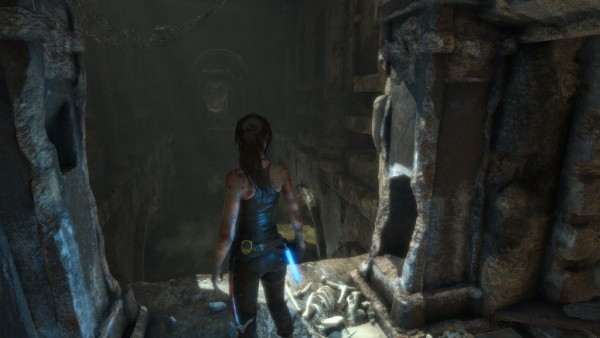 While Rise of the Tomb Raider is demanding, I would argue that it has every right to be as right now it is one of, if not the best-looking game on PC in terms of graphics even without being completely ‘maxed out'. 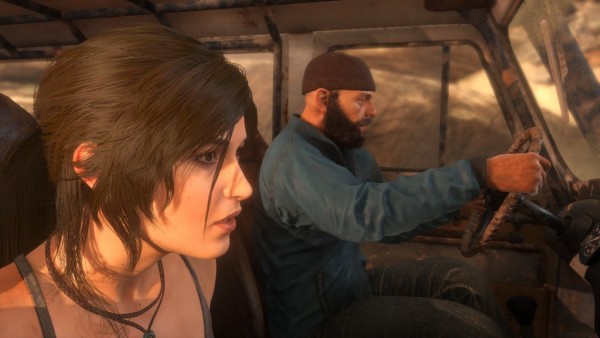 Both indoor and outdoor scenes feature some of the best lighting and shadows I have seen in a game for a long time and you can tell that a lot of effort has also been put into the character animations and textures. However, do keep in mind that this is a third-person game, designed with the camera placed at a specific distance from textures. If you angle the camera to be right up against a rock or an object, then you will start to see some blur.

The game is pretty but I haven't just spent all of my time admiring Lara's hair or staring off into the horizon. I have spent around 14 hours in Rise of the Tomb Raider and I am happy to say that it is an improvement over the original in terms of exploration.

There are a lot more secrets and hidden tombs to be found in this game. However, you will find some early on that you can't access without having a specific tool so you may find yourself fast traveling around a bit to go back to tombs you had to miss along the way.

It is also worth noting that if the controls are what put you off of the 2013 Tomb Raider reboot, then you may not find much of an improvement here. Lara still handles pretty much exactly the same- which can be a bit ‘janky' at times. There is also still a large focus on cinematic sequences and quick-time events though not quite to the same extent.

Overall, if you enjoyed the 2013 Tomb Raider, then I am confident that you will enjoy this sequel. The story is longer, the tombs are better and there is an actual world to explore here this time around.