Risk of Rain 2 will leave Steam Early Access in August

Risk of Rain 2 has been making its way through Early Access for about a year now. Originally, the development roadmap placed the final release window as ‘Spring 2020', but the team has identified some extra areas that can be improved and as a result, the release window is being pushed back to later in the year.

Hopoo Games explains that the release of Risk of Rain 2 was not necessarily delayed by COVID-19, as the team has been “mostly unaffected” by the pandemic. However, the team has expanded upon its plans for the final release, so additional time is needed to meet this expanded scope. 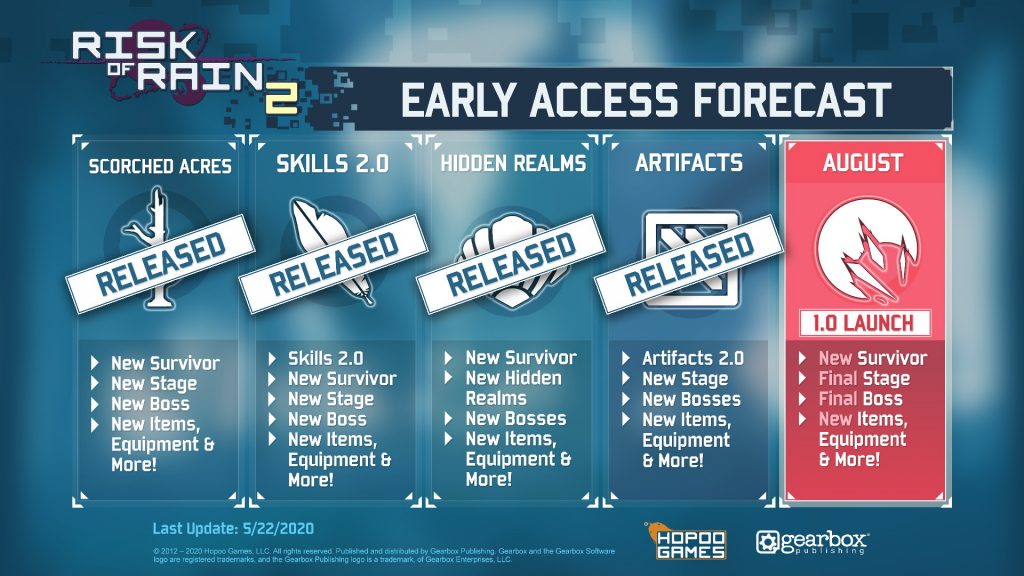 “As we all know, the next update is 1.0, the last update until we leave Early Access. Earlier this month, I ran a quick tweet to get some feedback on what RoR2 1.0 may look like to you. From that tweet, we not only learned that there’s quite a few areas of improvement we could work on, but also that you guys are passionate about what RoR2 1.0 could be—with many fantastic suggestions and ideas of things that weren’t in the original roadmap.”

“What we wanted to make sure was that RoR2 1.0 was truly a complete game experience, and that means not only completing and fleshing out content, but improving and iterating on old features and content that’s been left behind. In order to meet goals of what a 1.0 version of RoR2 can be, we want to let everyone know we will be releasing 1.0 in August 2020.”

Above you can see the newly updated roadmap, with the August update set to bring a new survivor, final stage, final boss, new items and more.

KitGuru Says: Risk of Rain 2 has been making great progress, but it is nice to see an Early Access developer taking feedback so seriously and extending the release to incorporate it. Have many of you played Risk of Rain 2?