Telltale has released first details of its Borderlands game

Last year Telltale announced that in addition to The Walking Dead and The Wolf Among Us, the developer will be releasing two new games: Borderlands and Game of Thrones. Today the studio has finally released the first few details of its Borderlands game, giving us a good idea of what to expect.

During SXSW, Telltale held a gaming panel titled: Two Sides to Every Story – Tales from the Borderlands Unveiled at SXSW, where members of the development teams from both Telltale and Gearbox discussed the story behind the upcoming episodic series. First off, the game is set on Pandora, the planet that the first two games are based on but this time, rather than focusing on Vault Hunters, the game will focus on two new characters: Fiona, a con-artist and Rhys, a cybernetically-enhanced Hyperion company man.

During the episodes you will switch between the two protagonists recalling the game’s plot from the future, Telltale’s Kevin Bruner, described the gameplay as never playing what actually happened but rather, “you’re playing this Big Fish version of what happened.”

“It’s a Borderlands game, there has to be crazy stuff going on,” Bruner said. “Figuring out how to do action and storytelling at the same time has been tricky to do without reverting to a traditional, run-around video game. We want to keep things cinematic, and have action sequences tell stories. We got better between Walking Dead and The Wolf Among Us, and I think we’ll get better as we move into Borderlands, because you have to have crazy, over-the-top action scenes, or it’s not a Borderlands game.” 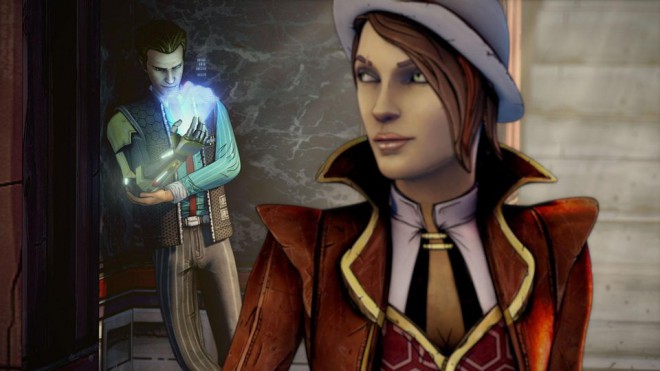 Tales of Borderlands will follow on from the events of Borderlands 2, with several past characters making an appearance but ultimately, the game is centred around the other characters on Pandora, rather than Vault Hunters and Bandits.

KitGuru Says: Telltale hasn’t done us wrong so far, the game is beginning to sound pretty interesting so I’ll look forward to seeing how it turns out. Are you guys interested in the studio’s take on Pandora?