DICE wrapped up the Star Wars Battlefront open beta late this afternoon, so the team is now moving on to preparing for the game’s release in just a few weeks time. Once the servers closed down to the public, DICE and EA revealed some interesting tidbits, including the fact that over nine million people gave the beta a go, twice that of the Destiny beta back in 2013.

Battlefront is now the single largest beta in EA’s history as a publisher. Obviously the Star Wars name will have played a big part in that in addition to the fact that it was open to everyone. Hopefully the sheer numbers will have helped EA prepare the servers for launch day, so we can avoid any horrific connectivity issues as seen in the past. 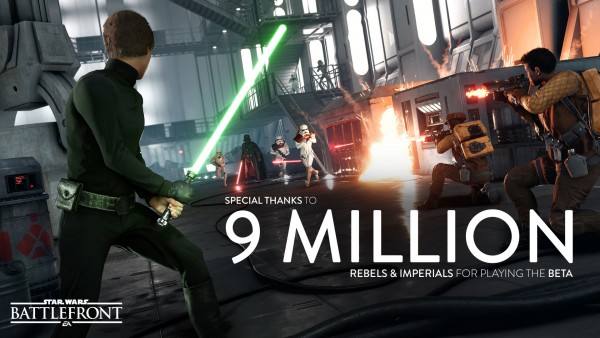 Obviously there is still work to be done. Battlefront only had three modes open to the public over the weekend: Drop Zone, Walker Assault and the co-op wave fighter mode. Unfortunately, Walker Assault was horribly unbalanced, so that will need fixing for a start. Hopefully these issues can also be avoided in the other game modes, of which there are quite a few.

Aside from that, EA did finally announce the game’s season pass, which will offer four ‘expansions’ to the game for $50/£39.99. It’s expensive for a season pass, particularly one we know absolutely nothing about. We could potentially get some decent content, or we could just get stuck with map packs, so perhaps avoid pre-ordering unannounced DLC.

Battlefront itself comes out on the 17th of November in the US and the 19th in Europe. We don’t know why the release is staggered like that, particularly these days, when most gamers have moved on to digital purchases. However, those on the Xbox One will get access early either way, thanks to the EA Access program.

KitGuru Says: I enjoyed Star Wars Battlefront more on the Xbox than the PC, so that will likely be my platform of choice. Don’t get me wrong, I love my shooters, I’m actually pretty heavily in to competitive CS:GO but much like Call of Duty, it feels like the sort of game I’d rather play on a sofa with my other friends around, rather than take super seriously on the PC. Did any of you try Battlefront over the weekend? Did you enjoy it? Were you put off? Let us know in the comments!