Home / Tech News / Featured Announcement / Warcraft 3: Reforged gets one of the lowest Metacritic user scores of all time

Warcraft 3: Reforged gets one of the lowest Metacritic user scores of all time

Earlier this week, Warcraft 3: Reforged officially launched and unfortunately, the final game did not live up to the ambitious ‘remake' that Blizzard originally pitched in 2018. The game has already been drawing criticism for downgrades and now, the re-release has the lowest overall ‘user score' rating on Metacritic.

The critic average for the game on Metacritic currently sits at 63 out of 100, which normally indicates a bad game. User reviews are even more critical, with the average user score currently sitting at 0.6/10 based on over 10,000 reviews. 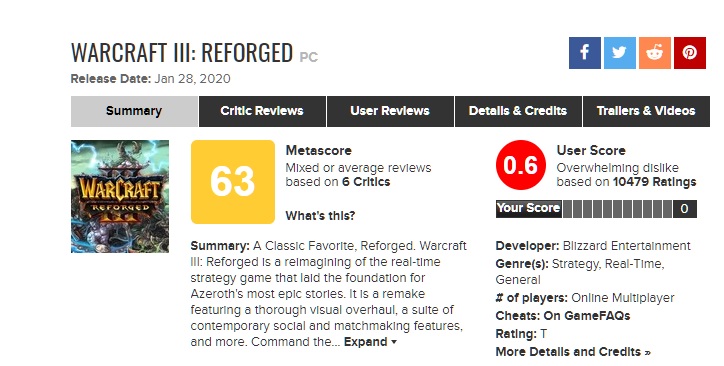 Of course, growing disappointment in Blizzard as a studio and the various controversies that have occurred in the last couple of years won't be helping here. Anthem was perhaps the most disappointing game of 2019 but that still managed a user score of 3.4 on Metacritic.

If Blizzard ever needed a wake up call for how much fan support it is losing at the moment, this might well be it.

Previous Zalman CNPS20X and CNPS17X: Noctua didn’t see this coming!
Next Nintendo’s Breath of the Wild sequel apparently won’t be out in 2020