Microsoft received a lot of flak when it made the Windows 10 upgrade ‘recommended,' so something that would automatically install if you didn't opt-out. So much so that one woman sued and won. It seems finally though that Microsoft is going to scale back its pushy pop-up and will soon offer new options to make it easier to avoid.

Microsoft's biggest and boldest move in recent years has been to make Windows 10 available to anyone with valid Windows 7 and 8 licenses, for free. However not everyone wants or needs the upgrade, even if Microsoft has been rather pushy about it. Moving forward, it will offer new “Upgrade Now”, “Choose time” , and “Decline free offer,” options as part of the upgrade pop-up. 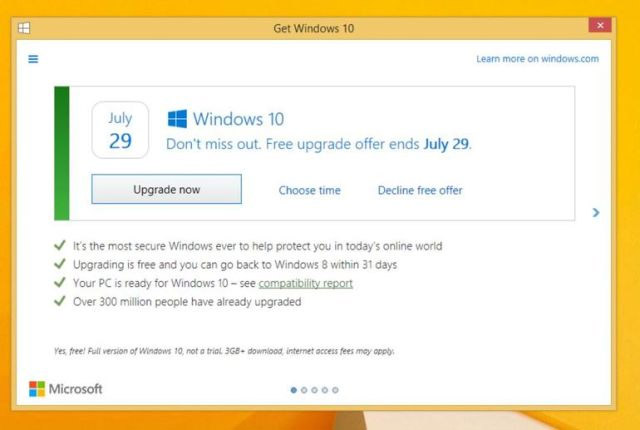 That means that if you have selected your preferred option and click the red X in the corner, it will close down the window and nothing else. Previously doing so without first de-selecting the update would have seen Windows automatically begin the download and install it, even if you were in the middle of doing something else.

“We've been working hard to incorporate [customer] feedback and this week, we'll roll out a new upgrade experience with clear options to upgrade now, schedule a time, or decline the free offer,” said Microsoft's executive VP of Windows and devices group, Terry Myerson in a statement (via ZDnet).

Perhaps more useful for those who already feel duped into the free update, Microsoft has also pledged to begin offering free degrade advice for people. If anyone wants to go back to Windows 7 or 8.1 from Windows 10, they can do and Microsoft will hold their hand through the steps.

KitGuru Says: Here's hoping Microsoft learns from this lesson. Encouraging Windows 10 adoption is one thing, but making people feel duped into using it is another entirely.