Microsoft has redesigned its music app for Windows 10

Microsoft has been previewing the new Windows 10 operating system for some time now and it looks like some of its basic apps are coming along nicely with the new music app getting a design overhaul, which appears to have been partially inspired by Spotify.

The updated preview app for Windows Insider members includes a new layout, which is very reminiscent of Spotify with its dark theme, which is different to the white theme found in the current Windows 8.1 music app. 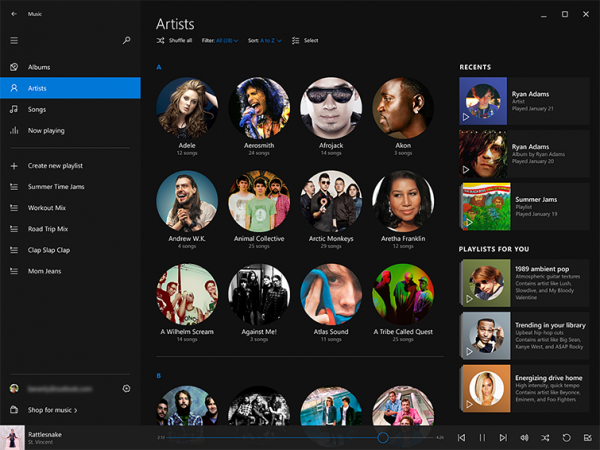 Aside from that, we recently heard that Microsoft may be dropping the Xbox brand name from its media apps with Windows 10, which is likely in effort to keep with its new cross-platform theme with universal apps.

It is likely that we will see Microsoft add new design elements to many of its basic apps in the lead up to Windows 10, particularly the media centric ones. Additionally, it looks like Microsoft is aiming for a black and white theme for the operating system, which is still due out this summer.

While desktop users will be getting Windows fairly soon within the next few months, the Xbox One console and Windows Phone devices will have to wait a bit longer as no release date is set for other platforms.

KitGuru Says: Windows 10 is shaping up nicely and it seems like plenty of Windows 7 owners are planning to take advantage of the free upgrade. Are any of you currently using the Windows 10 technical preview? What do you think of it so far?