The next Windows 10 feature update should roll out this week

We've known to expect another Windows feature update in April for quite some time. Previously, it was thought that this update (codenamed Redstone 4 internally) would launch as the ‘Spring Creators Update', but it looks like that plan has changed, with Microsoft confirming that Redstone 4 will launch as the Windows 10 April Update, which should land tomorrow.

Initially, we thought that the Windows 10 April Update would arrive earlier in the month, but some last minute issues caused Microsoft to delay the rollout. Now, it should kick off this week, in fact, the Edge browser has already been updated to show off some of the new features coming in this next update. 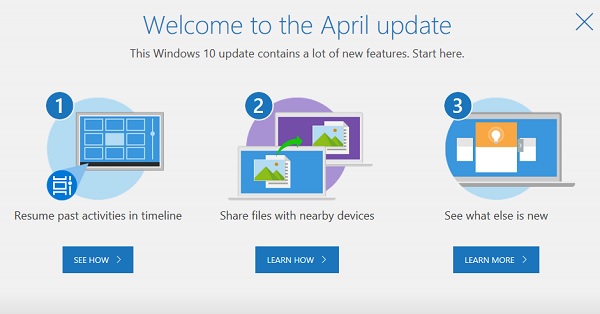 The Edge browser received an update to its welcome page, which now contains a big banner showing off the April update. It currently shows off the upcoming Timeline and file sharing features coming in this update, but the ‘learn more' buttons currently don't lead anywhere.

This should change tomorrow, as Microsoft typically releases new patches on Tuesdays. With that in mind, we should be hearing more from Microsoft within the next 24 hours.

KitGuru Says: I'm looking forward to this update in particular due to the fluent design changes. That said, there have been issues with brand new feature updates in the past, so I'd understand if anyone was planning to hold off. Have any of you tested out the April update as a Windows Insider?

Previous Journalists find themselves in court after reporting accusations against Quantic Dream
Next Some 13-inch MacBook Pros may have faulty batteries, so Apple is replacing them