Collecting data on your customers in order to sell to advertisers is a bad idea according to CEO of Apple, Tim Cook, who took a moment during the annual Champions of Freedom dinner, hosted by public interest research group, the Electronic Privacy Information Centre (EPIC), to criticise his technological competitors. While he named no names, it seems likely that his major targets of the attack were companies like Facebook and Google, which have made a business out of selling customer data to better target adverts at them.

Although Apple has been accused of collecting and selling customer data itself in the past and was culpable of sending information to the NSA and other intelligence agencies, Cook said that companies which sold data often lulled customers into complacency over their personal information. He went on to say that he and his company believed that Apple customers should not have to choose between privacy and security.

“We believe that people have a fundamental right to privacy. The American people demand it, the constitution demands it, morality demands it,” he said.

“I’m speaking to you from Silicon Valley, where some of the most prominent and successful companies have built their businesses by lulling their customers into complacency about their personal information. They’re gobbling up everything they can learn about you and trying to monetise it. We think that’s wrong. And it’s not the kind of company that Apple wants to be.” 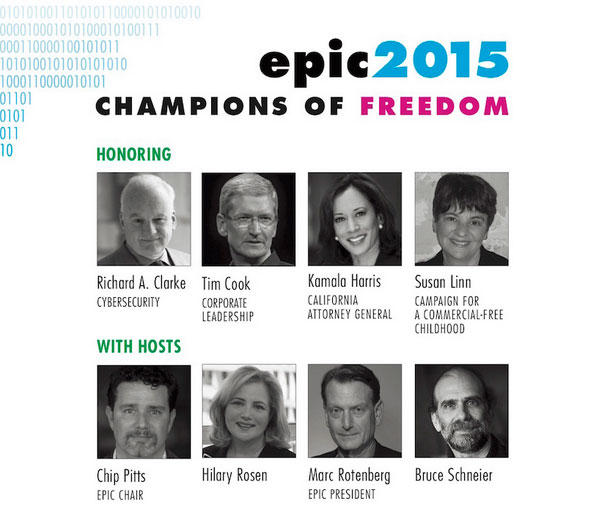 Cook was honoured at the meal, along with Californian attorney, Kamala Harris and Richard Clarke, a former counter terrorism coordinator for the US government

Although many consider Apple on par with other tech giants for its usage of customer data for its own ends, Apple has made a big push for encryption of communications over its devices in recent months, in response to international governments’ continued drive for carte blanche access to information.

Cook mentioned this at the EPIC dinner, suggesting that while he agrees with the US government’s stance on tracking down dangerous criminals, that he wouldn’t want to see Apple customers made vulnerable in the process.

“Now, we have a deep respect for law enforcement, and we work together with them in many areas, but on this issue we disagree,” he said. “So let me be crystal clear — weakening encryption, or taking it away, harms good people that are using it for the right reasons. And ultimately, I believe it has a chilling effect on our First Amendment rights and undermines our country’s founding principles,” he said (via Telegraph).

KitGuru Says: It’s great to hear a company as large as Apple stand up for privacy and encryption, but it’s not entirely guilt free in this respect. Do you think Cook is genuine with his concerns?