Why does the U.S. CISA cybersecurity bill keep resurfacing?

If there is one thing that we've learned from the past few years of anti-terror and anti-hacking legislation that have been pushed for in various governments around the world, politicians can be dogged when it comes to the perceived crack down on criminal elements. If it wasn't SOPA, it was PIPA, if not them, then TTIP, or TPP and the Cybersecurity Information Sharing Act (CISA) is one of them. To explain more about it and why it keeps coming back, a number of privacy advocates recently held an AMA, answering people's questions.

With many politicians wanting to push this legislation through, the array of organisations against them has grown in number. The EFF, ACLU, Fight for the Future and Access are all part of the pro-privacy coalition. When asked by commenters what could happen if the act were passed into law, they explained that it would not be good for consumers.

“Right now, it is very difficult to sue in a class action lawsuit if you are a victim in a data breach. If CISA were passed, it would also be difficult for the government to fine or regulate companies who don't protect their networks,” said Nathan from Access. Furthermore, companies will have less of an incentive to protect customer data and will be required to give much of it over to the NSA, as well as reducing what safeguards are in place to prevent its unauthorised usage. 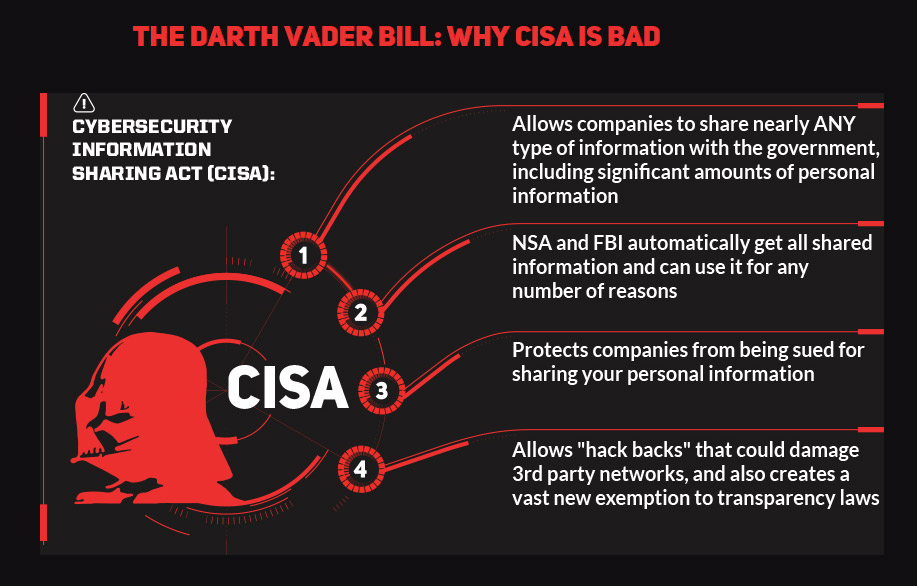 The question is, who will shoot first?

Worse yet, companies themselves would be able to share information on their customers, with almost no limitations, regardless of privacy considerations.

So it's clear why so many people are pushing back against attempts to pass it into law. However with such clear and obviously negative consequences for voters, it makes you wonder why it is that politicians are pushing for it in the first place.

“They want to be able to say they did something for cybersecurity, but lobbyists and the intelligence community are pushing bad bills like CISA,” explains the group. It also leapfrogs over and around the usual hurdles with senators holding meetings to discuss it in secret.

Much like SOPA and PIPA before it, CISA, we're told, can only be truly defeated if it's admonished heavily in the public eye. So much so that no politician would put their name to it for fear of being associated with an unpopular bill.

KitGuru Says:  If you want to assist these groups in combating CISA, they urge you to contact your local representatives to ask them to vote no on all CISA related legislation. You can do so quickly and easily at the StopCyberSpying website here.