Some hackers have gone ahead and cooked up Breaking Bad themed ransomware, which is currently affected a few people over in Australia. The new malware, which encrypts a PC’s images, videos and documents, was recently discovered by Symantec.

The ransomware is named Trojan.Cryptolocker.S. Once a user is affected, their files will be encrypted and a ransom message will be displayed on the screen, demanding $1000 AUD (around £500) to restore access to the PC. The ransom message uses the Los Pollos Hermanos branding, which is taken straight out of Breaking Bad. Additionally, the email address tied to the ransom is: [email protected] 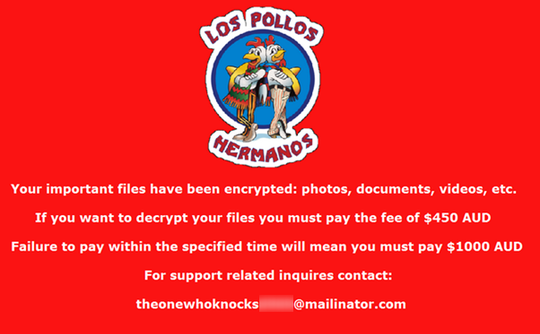 “We believe that the crypto ransomware uses social engineering techniques as a means of infecting victims. The malware arrives through a malicious zip archive, which uses the name of a major courier firm in its file name”, the Symantec blog post reads.

A zip file called PENALTY.VBS leads to the ransomware being downloaded on to the victim’s computer. A pdf file is also downloaded and opened which attempts to trick the user in to thinking that there was nothing malicious about the file originally downloaded.

“The malware encrypts files using a random Advanced Encryption Standard (AES) key. This key is then encrypted with an RSA public key so that victims can only decrypt their files by obtaining the private key from the attackers.”

Once the ransomware has infected a PC the only way to decrypt the files with the private key. Once again, the moral of the story is to be aware of these types of malware and be vigilant when checking email attachments and files before downloading, opening or installing anything.

KitGuru Says: As always, the best thing to do with these sorts of things is to raise awareness, that way more people can protect themselves from being scammed.