Google Chromecast, the $35 dongle that made the ‘smart’ tv redundant, has it’s first competitor, with Sony announcing it’s Google OS based ‘Bravia Smartstick,’ priced at £100.  However, at that higher price point does it stand much of a chance?

It doesn’t really have the  sleek and simple design of the Chromecast, but the chances of you staring at the back of your TV judging it are pretty slim.

The Chromecast relies on you to control it with your phone or tablet over WiFi, whereas The Bravia Smartstick will include a remote instead and a few extra functions that the Chromecast doesn’t have yet. Being based on Google TV rather than using an Android mirroring tool, the Smartstick can actually install apps directly to the dongle without having to send information from your laptop, phone or tablet, making it compatible with the full range of on demand apps from the play store. Right now the Chromecast only has support for Netflix, Chrome, Play movies and Play music.

You may be thinking the Smartstick sounds great right now with more features, no need to have another device paired with it and a handy remote so you don’t have to use up battery on a device, but Sony has made one huge mistake: compatibility is limited to the 2013 Bravia TV line. Sony does this surprisingly often, with many older Bravia Smart TV’s unable support Netflix and older Blu ray players facing the same story. The lack of support for legacy models is a huge step back for the already disadvantaged dongle at it’s current price.

KitGuru Says: If you bought a Bravia TV recently then maybe this product is worth your time, but for most of us this dongle is now irrelevant. I’m still holding out for the Chromecast to come to the UK. In the mean time, would you consider getting a Smartstick? 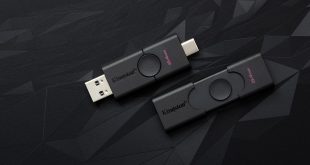 Kingston is adding a new USB drive to its Duo family of plug-and-play drives. The …