The company mostly known for its GeForce graphics cards said it would “showcase new Nvidia Tegra mobile technologies, gaming innovations and advanced automotive display technologies” at the trade-show. The press conference where Nvidia plans to discuss its new products will be webcast live, which will allow people around the world to get all the information about the company’s innovations.

Nvidia’s fifth-generation Tegra is code-named Logan. The application processor will contain ARM Cortex general-purpose processing units as well as Kepler architecture-powered graphics chips that is expected to support GPU computing, Direct3D, OpenGL 4.4, OpenGL ES 3.0 and OpenCL application programming interfaces. Nvidia is pinning a lot of its hopes onto the integration of its premium Kepler graphics architecture into mobile devices since it could greatly boost graphics quality and performance as well as use GPU stream processors for general-purpose computations. 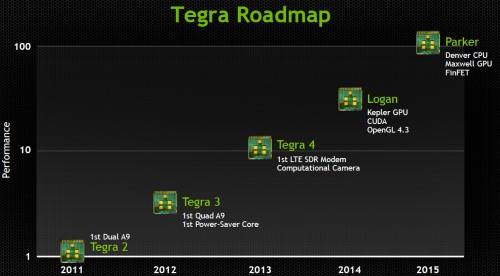 The Santa Clara, California-based company showcased the Tegra 5 “Logan” system-on-chip at Siggraph 2013 in July, 2013, for the first time. The firm said back then that the chip consumed only 2W of power even in high-performance configurations. Overall performance of the graphics processing engine inside Logan should be higher compared to GeForce 8800 GTX (Nvidia’s flagship graphics board in 2006 – 2007). Unfortunately, at present it is unknown how Tegra 5 “Logan” stacks up against other leading mobile SoCs available on the market today, such as Apple's A7 processor with Imagination Technologies' PowerVR 6-series “Rogue” graphics technology inside. 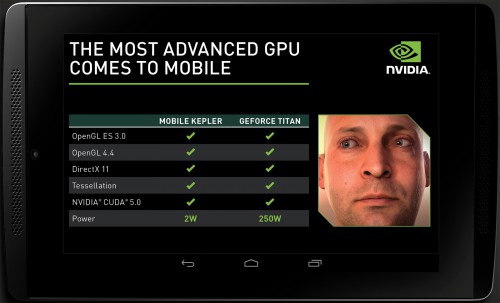 It is necessary to note that last year Nvidia announced plans to license Kepler graphics architecture to other developers of mobile application processors. Theoretically, the company may announce actual partnerships on the matter at CES. Besides, the firm may introduce its new-generation Shield gaming device powered by Tegra 5 “Logan” at the trade-show as well.

KitGuru Says: It takes a long time for actual device manufacturers to integrate application processors into their devices. Therefore, a formal announcement does not usually mean actual market availability.