With standard Wi-Fi, clients are served in sequence; during the time, only one device is sending and receiving information, hence, network capacity is being used only partly. The accumulation of these sequences creates a drop in throughput and capacity as more clients join the network. This situation can be further worsened as more devices stream high-definition video. Qualcomm’s wireless network chips with support of three- and four-stream connectivity and MU-MIMO enables concurrent transmission to groups of clients, making more efficient use of available Wi-Fi network capacity as well as speeding up communications.

“Great connectivity is not just about increasing the absolute speed,” said Dan Rabinovitsj, senior vice president of Qualcomm Atheros. It is about making better use of network and airtime efficiency to support the growing number of connected devices, services and applications.” 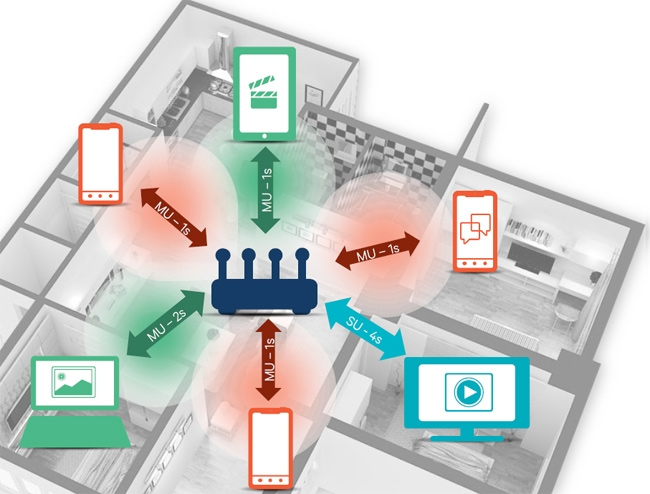 “After seven years of MU-MIMO development and testing, we have gained a deep understanding of real-world channel behavior with this advanced Wi-Fi technology in crowded environments,” added Mr. Rabinovitsj. “These insights have led to the creation of our precision-based algorithm technology that, along with technologies like the Qualcomm Internet Processor and StreamBoost, maximizes Wi-Fi performance for all connected devices.”

Qualcomm’s Vive 802.11ac chips featuring multi-stream 802.11ac Wi-Fi with multi-user MIMO (MU-MIMO) technology support transmissions via up to four streams and with up to 80MHz channels, thus providing maximum bandwidth of up to 1.73Gb/s. Not all solutions can enable maximum bandwidth, but the benefits of MU-MIMO architecture should improve quality of user experience rather significantly in general.

To get substantial benefits of Qualcomm’s Vive 802.11ac chips featuring multi-stream 802.11ac Wi-Fi with multi-user MIMO (MU-MIMO) technology, it should be supported by both clients as well as access points, routers, gateways, etc. Qualcomm Atheros has introduced a complete family of solutions for networking products, as well as smartphones, tablets, personal computers, consumer electronics and automobiles that support the latest technology.

Actual products featuring Qualcomm’s Vive 802.11ac chips featuring multi-stream 802.11ac Wi-Fi with multi-user MIMO (MU-MIMO) are expected to emerge in early 2015. Since it will take some time before the new chips become widely adopted, the Wi-Fi networks will only actually get better in several years from now.

KitGuru Says: Keeping in mind that 802.11ac technology theoretically can support transmission of four data streams over 160MHz channels with MU-MIMO, the new Qualcomm wireless solutions will not offer maximum what the 802.11ac can. Therefore, expect more innovations in this space from Qualcomm and its rivals.