A Chinese blogger has published what it is claimed to be the front panel of the next-generation iPhone with enlarged display. The design of the panel resembles that of Apple iPhone smartphones and its existence may confirm that the Cupertino, California-based company is working on larger handsets.

Sina Weibo user jiezhixc has posted a photo (which was republished by AppleInsider) on which a lady with neat manicure (meaning that this is not a Foxconn factory worker) is holding a large white front panel (which resembles an enlarged iPhone panel) next to a space-gray iPhone 5s smartphone. The user claims that the piece belongs to the iPhone 6, which is expected to exist in two versions: with 4.7” display and with 5.5” display. It is unclear whether the panel is the final one, or a prototype.

The design of the alleged Apple iPhone 6 panel resembles that of other Apple smartphones, but features noticeable differences. There are cutouts for light sensor, camera, speaker and Home button. The screen’s bezel seems to be a little thinner compared to the existing models. 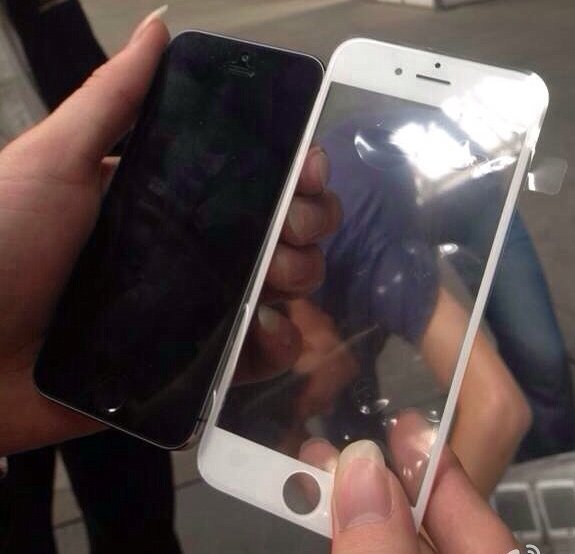 The whole iPhone 5s seems to be a little larger than the screen cutout of the alleged iPhone 6’s front panel, which may mean that the lady on the picture is holding a panel for the 4.7” version of the smartphone. Even in case the panel is not legitimate, it gives an idea regarding the size of the eight-generation iPhone, assuming that Apple does not change its design considerably.

Apple iPhone 6 is rumoured to be released this September in 4.7” version. By the end of the year it is expected that Apple will introduce a 5.5” flavour of the handset. Both smartphones are projected to be based on the A8 application processor and feature a number of hardware and software innovations.

KitGuru Says: Even the iPhone 5s with 4” screen cannot be comfortably used by one hand 100 per cent of time. The version of the iPhone 6 with 4.7” display will be almost impossible to use by one hand most of the time. Steve Jobs used to say that a smartphone should be small enough to control it with a single hand, so 3.5” display is the right size. However, three years after Mr. Jobs passed away it seems that the paradigm is changing even at Apple…