This new speculation comes from reliable KGI Securities analyst Ming-Chi Kuo (via 9to5Mac), whose recent investor notes describe the mid-range model to house a 6.1-inch LCD screen surrounded by an aluminium chassis. Tentatively pegged as the ‘iPhone 9’ until told otherwise, the device is expected to lack 3D Touch capabilities and have just on rear camera, features which are instead speculated to be reserved for the higher end models.

The iPhone 9 is expected to be a progression from the smaller 4.7-inch iPhone 8, coming in at the exact same starting price of $699.

The higher end models are currently being referred to as the iPhone 11 and the iPhone 11 Plus, to avoid confusion with the iPhone X (pronounced iPhone Ten). These are rumoured to trade out the aluminium frame for a stainless steel one and sport the newer OLED technology with Super Retina resolutions for its screen. 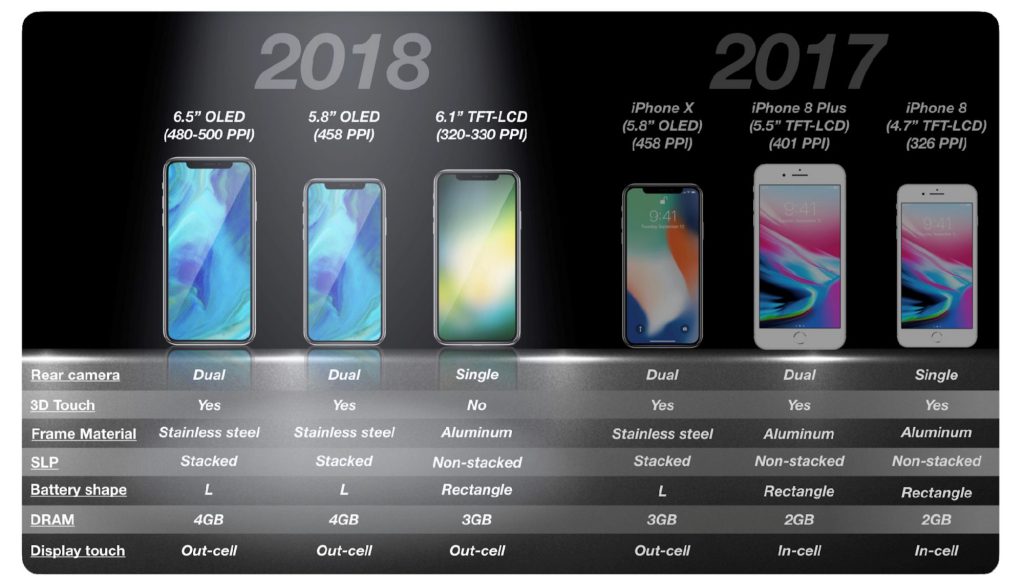 Image courtesy of KGI. Note that the image has a slight error. iPhone 8 Plus has 3GB of RAM.

Kuo speculates that all models will have similar designs, opting for the same notch introduced on the iPhone X and placing TrueDepth in the front facing cameras for Face ID capability. Hopefully this will be a slightly improved version of the tech after hiccups on the iPhone X.

If these rumours prove to be true, it fans the flames of rumours that state the iPhone X have much of a shelf life after this year, as having the new models coexisting with the older model it takes inspiration from won’t be preferable for Apple.

KitGuru Says: Considering the release of the iPhone X was staggered from that of the iPhone 8, it seems too soon to be thinking about newer models. But such is the way of the smartphone world and Apple will no doubt have had this in planning before the release of its predecessors. Do you like the sound of the rumoured iPhone 9, 11 and 11 Plus?