Industry analysts are currently predicting that Apple will soon become the first company to be valued at $1 trillion, following the launch of the Apple Watch wearable at the end of next month. Apple is currently estimated to be worth around $744 billion, more than double the size of the world’s second largest company.

This prediction is coming from Wall Street investment firm, Cantor Fitzgerald (Via TrustedReviews). In a note sent out to investors, one of the firm’s workers, Brian white, noted that Apple’s share price could soon jump to $180, a step up from its current $127 price tag. 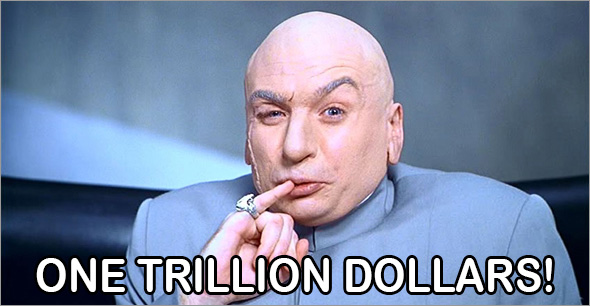 The Apple Watch itself isn’t the sole driving force behind this prediction though; the company has a growing presence in China too, which should have a big impact on share prices.

“Next month, Apple will enter its first new product category in five years, while media reports over the past several weeks have highlighted potential new areas of future innovation”, the note to investors said.

“We believe Apple’s iPhone portfolio and position in China have never been stronger. We believe the combination of these forces will drive the market to reward Apple's stock with an expanded P/E multiple, and we are raising our 12-month price target to $180 (~$1T cap; from $160).”

The Apple Watch marks the first new product category launch since the iPad back in 2010. The wearable launches on the 24th of April and is expected to significantly boost the popularity and mainstream appeal of wearable technology and more specifically, smart watches.

KitGuru Says: Apple is already the biggest company in the world and it is showing no signs of slowing down, it may well end up becoming the first $1 trillion company, although it still has a little higher to climb. Do you guys think the launch of the Apple Watch will boost Apple’s value?